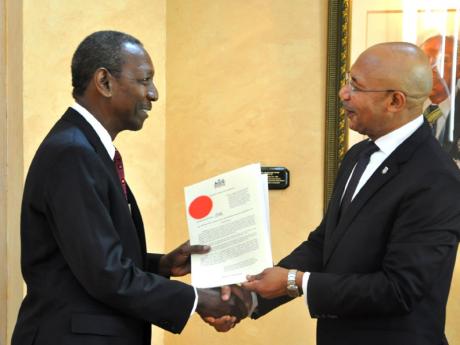 Sir Patrick Allen (right) presents the Instrument of Appointment to Acting President of the Court of Appeal, Justice Dennis Morrison.

Justice Dennis Morrison has been sworn in as the acting president of Jamaica's Court of Appeal.

Morrison, a Queen's Counsel, was appointed by Governor General Sir Patrick Allen to replace Justice Seymour Panton, who is on pre-retirement leave, after serving the legal profession for some thirty years.

During a swearing-in ceremony at King's House this morning, Sir Patrick expressed confidence that Morrison will continue to uphold the principles and standards of the justice system.

"His appointment is an expression of the confidence and trust reposed in his ability to give outstanding leadership to the Court of Appeal at this time," the Governor General said.

"I have no doubt that his family members and colleagues will continue to support him as he upholds the principles and high standard on which our justice system is predicated," Allen added.

Morrison's legal career has spanned several countries in the Caribbean.

On May 1, 2008, he was appointed a judge of the Court of Appeal in Jamaica and has also served as a Judge of Appeal in Belize and the Cayman Islands.