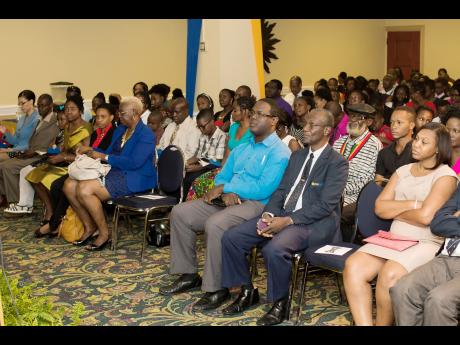 Contributed
The 2015 EduCom scholarship recipients and their families and friends pay keen attention at the awards ceremony.

Six-month old EduCom Credit Union has awarded 108 scholarships for the new school year valued at just over $2 million to students at the primary, secondary, and tertiary levels across the island.

The scholarships were presented at the organisation's official awards ceremony held on Wednesday, August 12, at the Knutsford Court Hotel in St Andrew.

The scholarships granted for 2015-2016 will allow students to pursue studies at the University of the West Indies (UWI), the University of Technology, various community and teachers' colleges, as well as at a number of high schools.

Speaking to this year's recipients, special guest speaker Diahann Gordon-Harrison, Children's Advocate of Jamaica, encouraged the students to stay focused and to be prepared to adjust socially. She said that consistency is crucial to success and irrespective of the challenges faced, they should never give up.

The children's advocate also charged parents and guardians to be supportive as students at all levels needed a stable home. Gordon-Harrison also spoke about the social ills that face children who do not have any structure at home, stating that parental support is often the missing key to children's success.

EduCom's president C. Leopold Nesbeth said that the credit union would always be committed to education and nation-building.

Scholarship alumnus Dwayne Smith spoke about the positive impact made on his life and circumstances as a result of pursuing further education with the help of scholarships awarded by the then AAMM Credit Union in 2013 and 2014. He now has a Bachelor of Science degree in Information Technology.

The EduCom Scholarship Awards programme selects candidates from its membership who have maintained a minimum B-plus average in their recent examinations and have demonstrated financial need.

Of the 108 scholarships granted this year, 98 recipients are secondary-level students, and 10 students will pursue degree courses.

The former AAMM and UWI, Mona, and Community Credit Unions, which merged to become EduCom, have assisted more than 500 students since the scholarship progamme began.