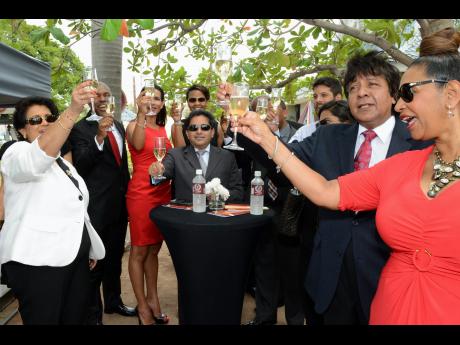 "It's a hell of a significance," Kenneth Benjamin, executive chairman of the Guardsman Group, told The Gleaner yesterday, following the 50th anniversary service for Guardsman Armoured at the Garrison Church of the Ascension, Up Park Camp, St Andrew.

"Fifty years is a long time in the life of a company, especially a service company in a very competitive environment, and we've retained our number-one position. We're the innovators, and we keep innovating," is how Benjamin explained the ongoing success of Jamaica's top-rated provider of a comprehensive range of security services.

Guardsman has come a long way for a company that started with six clients, one truck, four guards, and no vault, and now employs 7,000 workers in seven countries across the Caribbean, with 550 of them in Jamaica, where the company has a fleet of 750 armoured trucks and six vaults ... and is still expanding.

Yesterday's anniversary service marked the beginning of a year-long round of celebratory activities, which Renee Menzies McCallum, managing director of Guardsman Armoured, explained would be people-centred.

Guardsman will pay tribute to 350 employees who have racked up five years or more of service, as well as the six original clients, who have remained loyal over the past half a century, and others who have been with them in excess of 20 years.

"We try to ensure that everybody is included," Menzies McCallum told The Gleaner.

Admitting that "it's been a good run", Benjamin made it clear that Guardsman is still committed to not only maintaining, but surpassing the quality service that has made it a hallmark over the decades.

"The people, training and high standards we set," he promptly answered when asked what has made the difference for Guardsman.

"Anywhere in the world when they are having seminars or new innovations, we send our people to attend whatever courses and whatever things that we can learn anew. Because the crime situation in Jamaica is a little higher than the rest of the countries around, we try and keep one step ahead of the criminals. So, you know, whatever it takes, we are going to be there," he disclosed.

And this is the way things have been from the inception of their business, Benjamin shared.