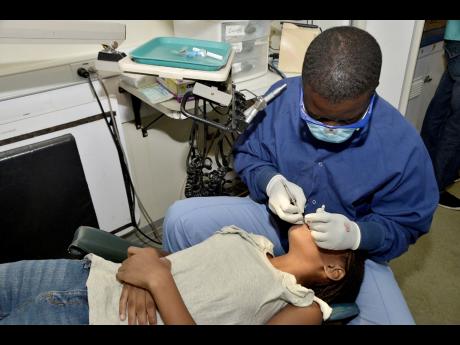 Contributed
A child receives some attention from the dentist during the annual back-to-school health fair organised by the Rotary Club of Trafalgar New Heights for children of Maverley, St Andrew. 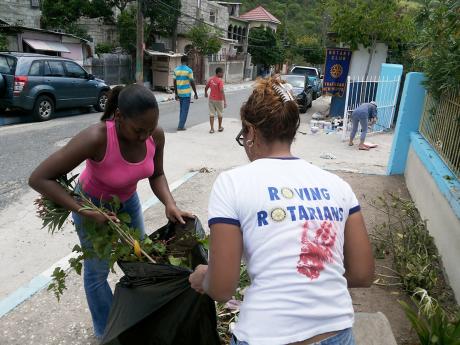 Contributed
Members of the Rotary Club of Trafalgar New Heights conduct a beautification exercise at a basic school in August Town. 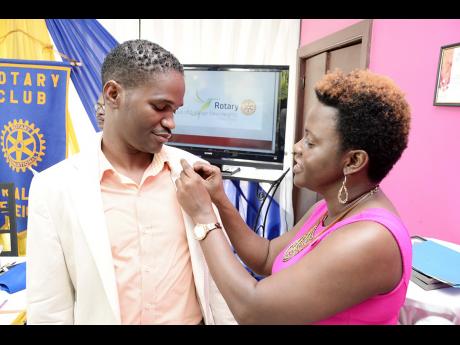 Contributed
Horace ‘Hugo’ Matthews, president of the Rotary Club of Trafalgar New Heights, is pinned by immediate past president Coleen Lewis as he is installed as club president during a recent ceremony.
1
2
3

With 10 projects lined up for the Rotary year, including the staging of its annual back-to-school health fair in Maverley, St Andrew, and the construction of a library for the Central Branch All-Age School in Kingston, president of the Rotary Club of Trafalgar New Heights Horace 'Hugo' Matthews says the club is ready to have an impact on the lives of young people in the Corporate Area.

The club of young professionals, deemed to be the only New Generations organisation of its kind in Rotary across the Caribbean, recently installed a new board of directors and president to lead the charge for the 2015-2016 Rotary year, which has been centered on the theme: 'Be a Gift to the World'.

According to Matthews, his new board members are talented, energetic, and ready to execute.

"Given the number of projects we will undertake, we need a strong and capable team and we have a team that has already hit the ground running," Matthews said.

The 37-year-old architect, Matthews, says the club will increase its focus on young people who, he notes, are integral to the building of the economy and the nation.

He said, "The gift that we want to give to the world must not only feed a man's body, but must also feed his mind, his spirit, and his character; must be long lasting and life changing, you must able to pay it forward. It should not extend only to one person, but must be able to be passed on from this generation to generations to come."

Matthews said through the staging of its performing arts camp last year in Seaview Gardens, the club had already begun to explore non-traditional ways of tackling literacy and engaging youth.

"Through that camp, we were able to not only provide them with ways of dealing with conflicts, but they received skills in theatre production that they can take anywhere with them," he said. "And this year, we are going to deepen that engagement by also infusing financial literacy to expose the children early to good money-management skills."

Beyond improving literacy, the club also intends to partner with the Andrew Bruce-led Plant Jamaica initiative to outfit schools with their own sustainable farm projects and introduce water harvesting and reusable energy for classrooms.