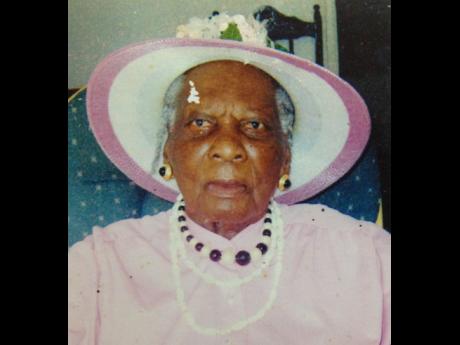 "After hugs and kisses, the question would always be 'Yuh hungry?', and my brothers and sisters dared not say no because food would be served instantly," Thelma recounted after the passing of her stepmother, Miss Tiny.

"Gone now are the days when we would hear her high-pitched voice asking how much coconut cake we wanted. Everybody in the McCaw community, where Miss Tiny grew up, loved her coconut drops and adored her endlessly."

Miss Tiny, also known as Henrietta Francella Thompson Burke, was born on August 5, 1911. She spent more than 100 years of her life loving and caring for the people around her, specifically her family and friends.

She married her first husband, Leopold Thompson, who predeceased her. But from the marriage she had two children, Ruthlyn Thompson-Weir and Renford Thompson.

After the death of her first husband, she lived alone for a very long time and then she remarried.

Henrietta married her second husband, Kenute Burke, in the 1990s, when she opened her heart to him and his 12 children. Miss Tiny treated Ralph, Leford, Easton, Lloyd, Patrick, Thelma, Roy, Neville, Carlene, Ronald, Beris, and Richard as if they were her own children. Roy even became her favourite.

Thelma described how endlessly Miss Tiny loved: "Once, when Thelma's father, Kenute, was hospitalised and Miss Tiny went to visit him, she dashed from the car and walked faster than expected of a woman already past 90 years old, just to be by the side of her husband."

Although she had lived past the century mark, Miss Tiny was always bubbly and energetic, but would be saddened if she didn't see her Roy. She loved him and all her children and stepchildren, along with her grandchildren.

Miss Tiny was a God-fearing woman. She would praise God all the time because she loved Him with all her heart. She spent most of her days praying and worshipping Him. It was only five days before her 104th birthday that her family and friends were forced to mourn her death. They were saddened because, despite age, no one wants to lose a loved one, but she lived a good life and ran a good race. Her memories will live on.