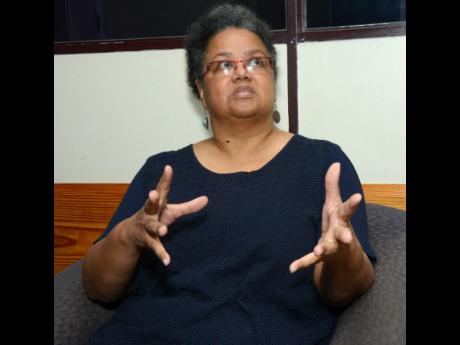 Ian Allen
Goffe ... it is travesty that after six years no one has been held accountable for the deaths and injury of the wards at Armadale.

Human rights lobby group Jamaicans for Justice (JFJ) says someone must be held accountable for the May 2009 fire at the Armadale Juvenile Correctional Centre for Girls which left 7 wards of the state dead.

The renewed call follows news that Constable Lawrence Burrell, who had been implicated in the fire, has been freed of the charges against him.

Burrell was charged in 2010 with administering a noxious thing with intent to injure, aggrieve or annoy as well as 14 counts of assault occasioning actual bodily harm. The charges followed a commission of enquiry which found that the fire was caused by a tear-gas canister thrown by the  constable.

However, he was freed yesterday after the crown conceded that it did not have sufficient evidence against him.

JFJ spokesperson Susan Goffe says it is travesty that after six years no one has been held accountable for the deaths and injury of the wards at Armadale.

She says it sad that there has been little to no closure in the matter.

Goffe argues that without accountability, the victims of Armadale fire and their families will continue to suffer.

Meanwhile, Goffe says the government must publish a comprehensive report outlining what steps have been taken to hold persons accountable as well as what has been done to make juvenile facilities safer.