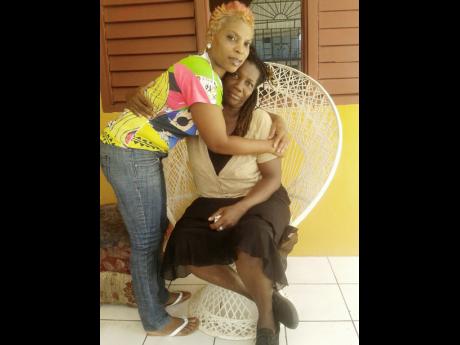 Two family members of Fortella Pickersgill, the woman who has been living under a tarpaulin, have been resting easy these days.

This as Charmaine Dennis, a Good Samaritan who saw the situation of her long-time friend, has been providing refuge for Pickersgill's youngest daughter, Jessica and her baby.

"I was scrolling through Facebook when I saw a picture of Maria (Pickersgill's alias) and her family, but I didn't recognise it was them until I watched the video, which brought tears to my eyes," Dennis recounted.

Dennis, who is self-employed and lives in a five-bedroom house with her family, told The Gleaner that she was not being inconvenienced.

According to her: "We all have our own room and the house has three bathrooms. Everyone is able to live comfortably, including Jessica and little Bri."

Dennis shared memories of Pickersgill and her family's known goodwill.

"She's a person who helps a lot of people. She used to put them up when they have nowhere to sleep. She and her family would even sleep on the floor while their visitors slept on the bed," she said, adding that there was no way she could sit back and watch them live like that.

Beyond grateful is Jessica and her mother, who testify to the baby's change of attitude since she moved from their tarpaulin home.

"Brianna has been so happy. And because she's interacting with the other children, she's been learning new things and she's very excited. When I see her like this, it makes me smile," said Jessica, who admits that at times she gets saddened when she thinks about her mother (Pickersgill) and sister, who are still sleeping under the make-do tent.

Pickersgill echoed songs of thanks.

"I'm really happy that Jessica has a safe place to stay and I just want to thank Miss Charmaine Dennis and her family for accepting them with open arms. Jessica and the baby have been eating non-stop. Miss Charmaine allows them to sleep as much as they want because they haven't been sleeping well the last couple of weeks," she said, then with a laugh added that Jessica bathes every chance she gets.

"Miss Charmaine treats them like they are part of the family and for that, I'm really thankful. I'm still at the tarpaulin, but I visit Jessica and Bri frequently. I really miss them, but I can't do anything about it. I'm just glad that they're happy and I don't have anything to worry [about]," said the mother.

Pickersgill told The Gleaner that though she is happy for the recent developments, she feels as if she's at a standstill.

"I know I'm not owed anything, but I don't want to wait in vain. Last night (Sunday night), the rain came and it was disastrous. Almost everything got wet. I had to be bailing water off the top of the tarpaulin."

"I really want to know where to go from here. People have been telling me that they are willing to supply boards and other material needed to make me a house, but because the government entities told me that they will help me out, then I don't want to go ahead and do my own thing then have to pull down. That would be wasting money and resources I don't even have," Pickersgill explained.

"Waiting blindly is really affecting me. I need to know what to do, and soon too, because I cannot continue living like this," she continued.

"One, one cocoa full basket, and I'm still smiling through my storm," said Pickersgill.