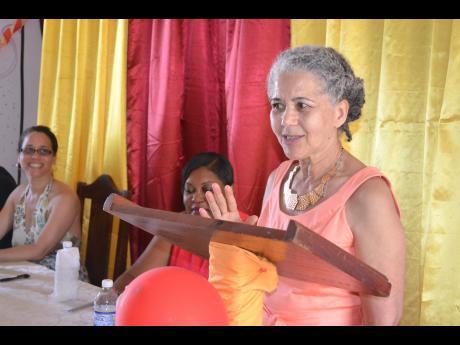 Retired administrative law judge Marjorie Keene Cotton, who was born in the rural St Ann community of Aboukir, before migrating to England and then moving to the United States, is crediting the early education she received as a child in Jamaica for her success.

An attorney-at-law, Cotton spent the last five-and-a-half years of her career as an administrative law judge in Houston, Texas.

Having attended Eccleston All-Age School until she was 10 years old, she then moved on to Clarksonville All-Age, before leaving Jamaica.

Cotton returned to the community recently to hand over $500,000 worth of scholarships to successful Grade Six Achievement Test students, who will begin high school in September. She also found time to talk briefly to The Gleaner about those formative years.

"One of the really great things about it was I was very bright, and my teachers let me skip classes (grades). I skipped the second grade; it was first class and second class, and then something else, and then it went up to six.

"So it was about eight grades or something like that, and I was in the top grade by the time I was 10 years old," Cotton explained.

Moving through the grades in record time gave her a lot of confidence in her ability and benefitted her when she went to school in England.

"Going to school in England, I had the confidence and I've done so well against the English students I was always at the top, or near the top, of the class."

She said the same thing happened when she went to the USA.

"And it was based on this education that I got in these schools in Jamaica, and the confidence I had because they let me go as fast as I could go. And that just taught me that there was nothing I couldn't accomplish if I set my mind to it.

"So I think very highly of the schools, of the teachers and I just love Jamaica and the Jamaican people."