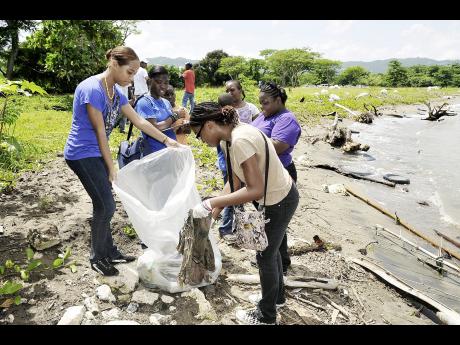 File
A volunteer adds a piece of rotting cloth to the garbage bag being held by another volunteer during the International Coastal cleanup along the beach behind the Catherine Hall Entertainment Complex in Montego Bay, St James last year. 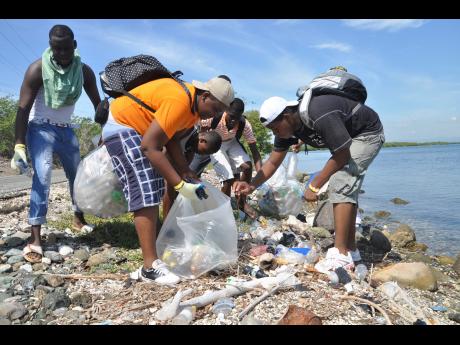 The Jamaica Environ-ment Trust (JET) is looking forward to another record turnout for this year's International Coastal Clean-up (ICC) Day activities in Jamaica, to be held on September 19.

In 2014, Jamaica ranked as the 12th largest ICC event in the world and the largest in the English-speaking Caribbean.

In 2015, the aim is to rank Jamaica in the global top 10 with more than 10,000 volunteers expected to participate in clean-ups across the island.

"We already have over 110 sites registered for ICC this year," said Suzanne Stanley, JET programme director. "We have been training coordinators from all over Jamaica and encouraging them to recruit as many

volunteers as possible so that we can meet our target of 10,000 beach clean-up volunteers on September 19."

ICC efforts began in Jamaica in the mid-90s with small clean-ups taking place in a few locations across the island. In 2008, the Jamaica Environment Trust became national coordinators of ICC activities in Jamaica and gained the support of the Tourism Enhancement Fund (TEF) as the primary donor, who has continued to support the initiative over the years.

ICC volunteers are responsible not only for picking up trash on coastlines, but also collecting data on the type of garbage affecting the marine environment. The data is compiled and sent by JET to the Ocean Conservancy in the US, which coordinates the global event.

"Last year's global ranking in the top 15 is really something to celebrate," said Diana McCaulay, JET CEO. "For such a small country like Jamaica to have so many people coming out to clean up our beaches is a testament to all JET and TEF have been doing to raise awareness about marine litter over the years, but we still have a long way to go."

Launched in February 2015, Nuh Dutty Up Jamaica aims to improve citizens knowledge about the impact of poorly handled waste on public health and the environment, while encouraging personal responsibility for the generation and disposal of waste.

Launched in 2014 with J$34.5 million in funding from TEF, Phase I of CCP included environmental education for adults and children along with practical strategies for tackling poor solid-waste management and marine debris in Jamaica.

In 2015, ICC will kick off phase II of CCP which was recently approved for an additional J$60 million in funding from TEF.

JET encourages all Jamaicans to support clean coasts by joining an ICC cleanup in their parish. A full list of sites can be found online at www.jamentrust.org. For more information on

Nuh Dutty Up Jamaica and the Clean Coasts Project log on to www.nuhduttyupjamaica.org.