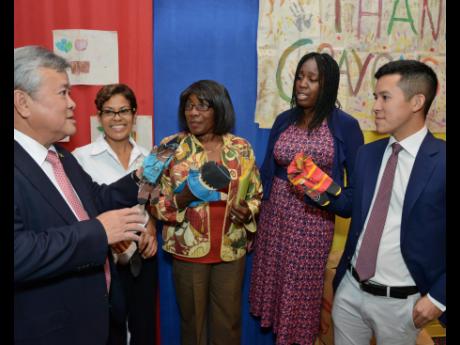 Ian Allen
Gary Butch Hendrickson (left), patron, National Baking Company Foundation, is enjoying the learning tools from Crayons Count with (from left) Deika Morrison, founder and programme director of Crayons Count; Dr Polly Bowes-Howell, acting director of VOUCH; Kaleela Bromfield, principal of the Sylvia Foote Basic School, and Craig Hendrickson, director of the Foundation. Occasion was the launch of the National Baking Company Foundation and announcement of Nationals continued partnership with Crayons Count. The launch was held at The Jamaica Pegasus hotel in Kingston on Wednesday. 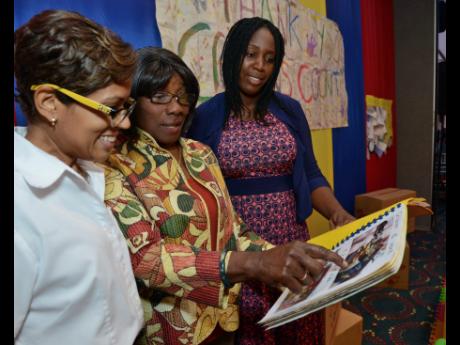 Ian Allen
Dr Polly Bowes-Howell (centre), acting director of VOUCH, leafs through one of the books on display with Deika Morrison (left), founder and programme director of Crayons Count, and Kaleela Bromfield, principal of Sylvia Foote Basic School during the National Baking Companys formal launch of its Foundation and also the launch of Nationals fourth year of major sponsorship of Crayons Count. The launch was held at The Jamaica Pegasus hotel in Kingston on Wednesday. 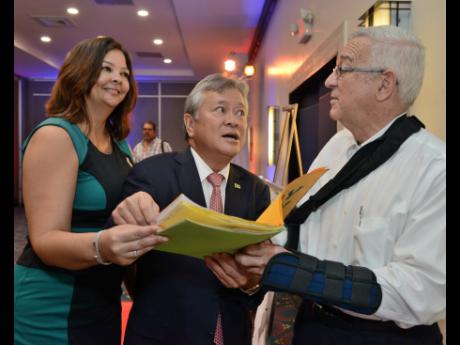 Ian Allen
Gary Butch Hendrickson (centre), patron of the National Baking Company Foundation along with Reverend Ronald Thwaites, minister of education, and Christine Scott-Brown, executive director of the foundation, leaf through one of the many childrens books on display during the launch of the Foundation and announcement of the continued partnership with Crayons Count. The launch was held at The Jamaica Pegasus hotel in Kingston on Wednesday.
1
2
3

National CEO Gary 'Butch' Hendrickson said giving back started with his grandmother who would pack little brown paper bags at Christmas time to give to the needy. Giving back was something he saw his parents continue to do. The motto was simple, 'we can (give), so we do'.

"Thankfully, due to our wonderful consumer base, really, really great customers, we can donate more than ever before. And so we will," he said. "I believe it is important that those of us who can, do."

And National Baking Company has done much. The company has donated to some 25 charitable organisations including Food For The Poor, in which it invested more than $20 million in supplying school furniture.

Hendrickson is the patron of the foundation, while fellow businessman Brian Jardim will serve as chairman.

Christine Scott-Brown will be the foundation's executive director.

National also used the event to announce its continued partnership with Crayons Count, for which it is the biggest sponsor.

Since its inception, more than 2,500 schools have benefited from resources offered through the programme. National has invested more than $200 million to Crayons Count and the foundation is fully involved in importing, packing and distributing the learning materials and operating the mobile unit of Crayons Count, the Learning Lorry.

Founder of Crayons Count, Deika Morrison, said despite the name, it was much more than just crayons. "There are 13 categories of learning tools in the kit," she explained, including paint brushes, scissors and puzzles. "They look like toys, they are a lot more than toys. Each tool has a developmental element and educational objective. Each tool serves a purpose."

Since 2012, Crayons Count has donated nearly 650,000 crayons, thousands of other items, hosted nearly 3,000 teachers in its workshops, conducted a successful summer-school programme, focusing on social skills and manners and hosted numerous events for parents and children.

Kerry-Ann Ennis-Henry, early-childhood consultant with Crayons Count, said parents, teachers and students were "eternally grateful" for the programme. She said persons even send samples of children's work, and pictures of them using the tools.

The National Baking Company Foundation donates the majority of the learning tools used by Crayons Count. In addition, the company sponsors the Crayons Count page in the Saturday Gleaner and raises awareness of early-childhood education through branded National/Crayons Count vehicles and bread bags.