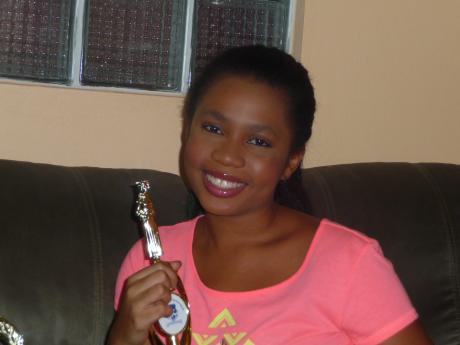 Andrew Harris
Morgan Kennedy holds on to one of her many trophies. 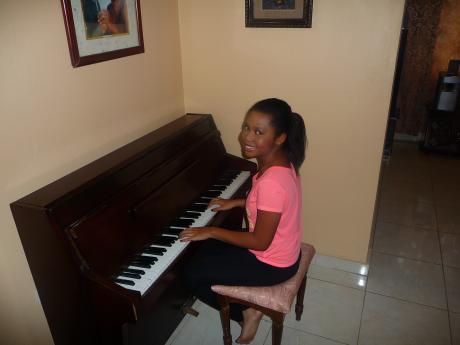 Last year, Immaculate Conception High School student Morgan Kennedy stunned her mother when she copped a distinction in the Caribbean Advance Proficiency Examination (CAPE) mathematics when she was just 14.

This year, her dedicated mother cried tears of joy when Morgan got seven distinctions and a one in her Caribbean Secondary Education Certificate (CSEC) examinations.

Morgan, who describes herself as a math lover, is aspiring to become one of the nation's youngest actuaries.

She has been an honour student for the past five years at Immaculate Conception High School, and collected the overall mathematics award at her graduation.

She went into this year's examination with three subjects - one CAPE and two CSEC -under her belt.

However, she did over CSEC mathematics this year and the result was less that the distinction she got last year.

The other subjects she got distinctions in are English B, chemistry, biology, physics, human and social biology and information technology, all with straight 'A' profiles.

She got a one for Spanish because she missed out on an 'A' for a straight 'A' profile in the written part of the examination; she scored a 'B' instead. She also got a distinction in English A last year.

"I was pretty nervous before the examination and I actually knew that some of the words I wrote on the Spanish examination were not Spanish at all," Morgan explained, after which she burst into laughter.

Morgan, when she is not studying, spends her time swimming and playing the piano. She recently started a new hobby, learning to play the guitar.

"It was stressful, but my mom is always up as long as I am studying, because she would make sure that whenever I fell asleep, she is there to wake me up to get back to my studies," said Morgan.

"I think what helps me a lot is that I have a great memory. I tend to remember stuff from the moment it is said and it never leaves my memory, even when I have finished with the subject area," she added.

Morgan has been the champion of the UWI Math Olympics competition for the past four years.

She is looking forward to being the youngest sixth-former at her school, and hopes she will be successful in next year's CAPE examination, for which she expects to sit economics, computer science, applied math and communication studies.

Her mother, Virginia Hall-Yaru, shared that, in earlier years she was very nervous for Morgan because her study habits never seemed as if they were working, but she knew that she would have done well.

"I knew she worked hard, and based on that I really expected her to do well, and though she was nervous I had a lot of confidence in her," said Hall-Yaru.

"But I knew that as long as she would get into work mode she would have done well, and we spoke about how she was doing during the period and I was very confident in her," she added.