Three-day celebration for the life of Colonel Lumsden 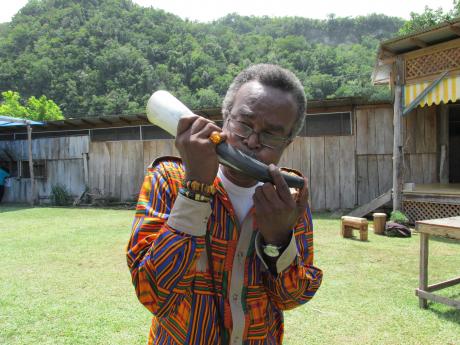 The Maroon community, local and overseas, is celebrating the life of Colonel Frank Lumsden, former leader of the Charles Town Maroons of Portland. He passed away at his home on August 18 at age 73.

In accordance with the imposing stature of Lumdsen in the Maroon community, the Charles Town Maroon Council and his family have planned a three-night traditional Maroon wake to take place tomorrow at 6 p.m. and on Saturday and Sunday at 2 p.m.

Lumsden was well known in government, diplomatic, academic and cultural circles, especially through the annual Charles Town International Maroon Conference, which has brought people from all over the world to the historic Maroon village. His transition has moved many people to pay tribute to the man who was committed and steadfast in his efforts to push the Maroon agenda.

Professor Verene A. Shepherd, University of the West Indies social historian and host of 'Talking History' on Nationwide 90 FM, said she is "saddened" by the death of Lumsden, someone she has known for a very long time.

"We worked together on several projects, including those associated with the bicentennial of the abolition of the British trade in Africans in 2007 ... He was a stout defender of the Maroons' culture, history and traditions, and their right to be," Professor Shepherd said.

In reflecting on the life and work of his fellow Maroon, Colonel Ferron Williams of Accompong Town, St Elizabeth, said Lumsden was a well-loved man who could deliver himself, one who was always looking out for opportunities to enhance Maroon development. He was a strong defender of the Cockpit Country, Williams also said.

Over the three days of celebration, there will be formal tributes, open mics, cultural presentations, singing, drumming, dancing, and other activities. The thanksgiving service for the life and achievements of Colonel Lumsden will take place at the Temple of Life Centre, 6 Fairway Avenue, Kingston 10, on Thursday, September 3 at 2 p.m. Interment takes place at a later date.