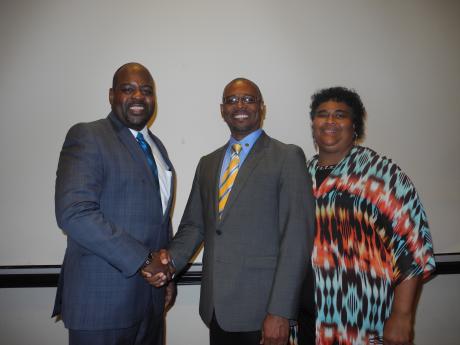 Prendergast took the oath of office under instruction from Barbados independent senator, Dr Carol Lady Haynes, herself an Optimist, during a classy installation ceremony held at the Savannah Beach Hotel in Bridgetown, Barbados, last weekend.

The new governor, a two-time Caribbean Optimist of the Year, comes to the position with a reputation for people-centred leadership, innovation and creativity.

Little wonder then that he wants to rebrand the programmes of the near 100-year-old voluntary service organisation. As part of his mandate, Prendergast is introducing the Optimist Caribbean Childhood Health and Response Mission (CHaRM), which will highlight the long-standing work of Caribbean Optimists in the areas of childhood cancer and HIV & AIDS, while bringing new and well-needed focus to the area of autism spectrum disorder.

"We who have the responsibility of ensuring a brighter, more prosperous and healthier future for our children cannot afford to fail in our mission. Autism is one of those areas of child health that is more than deserving of some attention by our society and our Optimist clubs at this time," asserted Prendergast.

Dr Luz Longsworth, head of the UWI Open Campus and from whom Prendergast took over as director at the Western Jamaica Campus, is neither surprised by his spirit of service nor his elevation to governor.

"Without doubt, Patrick's inclusive leadership style and passion for service to his community will ensure a successful year as head of this prestigious international service club," said Longsworth.

Said Prendergast: "The challenges being faced by our Caribbean people and, particularly, our children are, no doubt, phenomenal; but the essence of Optimism is to bring hope and inspiration through positive thinking and action, especially for the most vulnerable among us."

Prendergast will be the international voluntary service organisation's lead man in the Caribbean from October 1, 2015 to September 30, 2016 under the theme 'Bringing Out the Best ... Plus One'.