$3.84 billion worth of pharmaceutical and sundries supply contracts signed 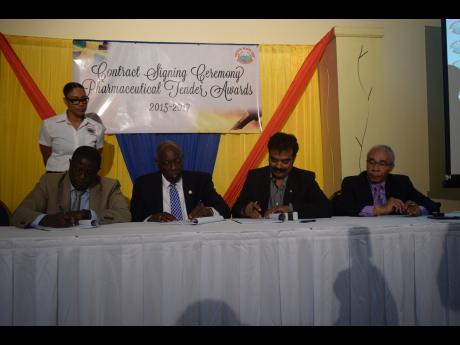 Contributed
Health Minister Dr Fenton Ferguson (second left) assists with the signing of the contract for the supply of pharmaceutical from Indies Pharma represented by Dr Guna Muppuri (third left). The contract was also signed by the CEO of the National Health Fund (NHF), Everton Anderson, and the chairman of the board of the NHF, Sterling Soares.

Health Minister Dr Fenton Ferguson says the Government has considerably improved access to pharmaceuticals and sundry items in the public health sector and there should be an even greater improvement in the next two years following Wednesday's signing of 47 contracts between the National Health Fund and suppliers amounting to US$33.4 million, or J$3.84 billion.

The signing took place at The Jamaica Pegasus hotel in New Kingston and involved 576 items on the Ministry of Health's Vital, Essential and Necessary (VEN) list.

In July this year, the University Hospital of the West Indies also signed three contracts for the supply of pharmaceutical and sundry items totaling US$1.5 million.

"Last year, the public health sector dispensed 2,968,227 pharmacy items. That is nearly three million items, yet there is still a major demand, which exceeds this number. We are, therefore, moving to satisfy the unmet needs, and that is why we took the decision to double the drug budget from $4 billion last year to $8 billion this fiscal year," Ferguson said.

He added that "we are coming from a drug budget of $898 million in 2004-2005 to $2.4 billion in 2010-2011, and, as I said, to $8 billion presently. We have, therefore, considerably improved access to pharmaceuticals in the public health sector and should see an even greater improvement in the next two years".

The National Health Fund is responsible for the procurement, warehousing and distribution of pharmaceuticals and medical sundries for the Government's health facilities.