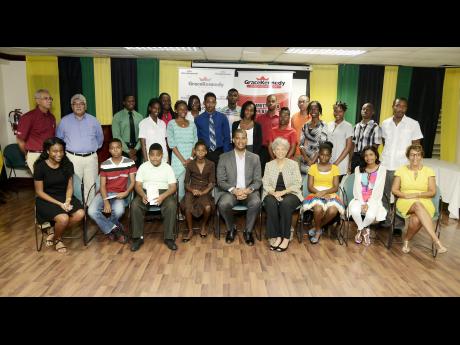 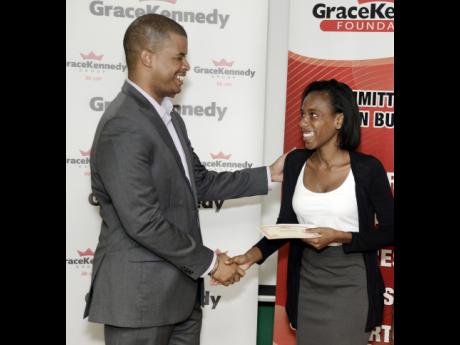 The GraceKennedy Foundation on Wednesday provided approximately $1.8 million in bursaries to assist 28 secondary-and tertiary-level students with their educational pursuits for the 2015-2016 academic year.

The bursaries, named in honour of the late Carlton Alexander, former chairman and chief executive of GraceKennedy Limited, were presented to the students at a brief ceremony at GraceKennedy's head offices at 73 Harbour Street.

Last year, bursaries worth $1.4 million were awarded but this year, there has been a $400,000 increase in the total figure awarded. According to executive director of the GraceKennedy Foundation, Caroline Mahfood, "We normally award four new bursaries to secondary-school students and two to students at tertiary-level institutions. However, this year we selected a total of eight persons to receive new bursaries - five secondary-school students and three at the tertiary level." The remaining 20 recipients are receiving a renewal, having previously been awarded a bursary by the Foundation.

Bursary recipients from grades seven to 11 will receive $40,000 each, while those in sixth form will get $60,000 for each of their two years. Those recipients attending tertiary-level institutions will each receive $100,000.

The bursary recipients are the children of employees within the 10 subsidiaries of the GraceKennedy Group. The awards are given as a means of encouraging academic excellence among the dependents of GraceKennedy staff.

The bursaries are highly competitive and candidates are judged on academic performance, participation in school and extra-curricular activities, and leadership potential, among other criteria. In order to receive a renewal, each student must maintain a minimum B average. According to Mahfood, "The students have performed really well and we are very proud to help them in their bid to keep doing well in school. We know this is good for Jamaica, and as Carlton Alexander used to say, 'What is good for Jamaica is good for GraceKennedy.'"

The GraceKennedy Foundation actively promotes well-being, primarily by supporting educational and environmental programmes and processes. It was established as a corporate endowed foundation by Carlton Alexander in 1982 to mark the 60th anniversary of GraceKennedy Limited.