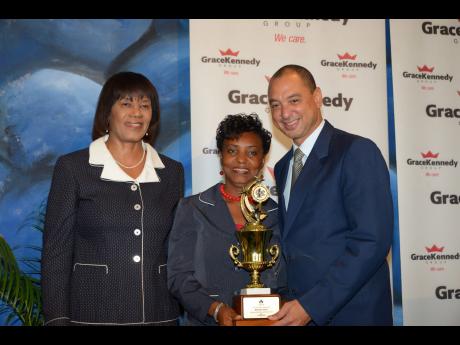 As part of her prize package for winning the GraceKennedy/

Heather Little-White Household of the Year 2015 title, Rosetta Steer received $100,000 towards the educational expenses for a secondary student she nominated.

That amount was given to her granddaughter, who is about to enter first form. However, when the new school term starts in September, there will be two students going to school.

Rosetta will be fulfilling a lifelong dream by attending The Doncaster School of Practical Nursing in Bournemouth Gardens. She will pursue this course of study even as she continues her current job as a household worker.

"For years, I felt as though I was stuck in a rut. Now, thanks to this award, the hard work I have put in over the years, and with the grace of God, I can now see myself as a very successful household worker," said Rosetta, who also won $250,000, which will help her complete her two-year course in practical nursing, but will also go towards the fulfillment of another lifelong dream - owning a home of her own.

The first of 11 children, Rosetta left Ewarton Secondary School at 15 years old, after only three months at the institution due to financial challenges.

"I could barely spell my name. My mother tried to send me back to school, but she found it hard to come up with the money. I had to go to school without breakfast, without lunch. I would go to school and hide in the bathroom at lunchtime because I didn't want anyone to know I had no lunch money.

In search of a better life, she left her home in St Catherine in 1982 to live with relatives in Kingston.

After becoming pregnant at age 18, she went back to live with her mother in St Catherine. After having her son, Jermaine, she went in search of work to support him.

She found employment as a household worker, and had her second son, Jason, at 26.

According to Rosetta, despite the difficulties she faced, she was determined to upgrade her skills set so that she could improve her situation and raise her children to the best of her ability.

That prompted her to start attending evening classes at Bethel Baptist Church, and to later sit and Jamaica School Certificate exams in English and civics.

She joined the Jamaica Household Workers Union and participated in training courses in public speaking, negotiation skills, leadership skills and computing offered by the Management Institute for National Development.

She also pursued training in mediation with the Dispute Resolution Foundation, and in 2014, completed a course in housekeeping through City & Guilds Group.

After someone placed an ad on her behalf in the Dr Bird publication, done by the US Embassy in Jamaica, offers of employment began to roll in from members of the expatriate community. Her reputation as an outstanding worker spread, and Rosetta became highly sought after in her field. In a very tangible and meaningful expression of their appreciation for her and her standard of work, two of her current employers, both diplomats, nominated her for the Top Household Worker Award.

"Winning the award has given me more confidence to do things that I didn't think I could do before, such as speaking in public. When I was named the winner of the award, I had to stand up and speak in front of everybody at the luncheon. I was nervous because that is one of my biggest fears. However, I did it. And I said to myself afterwards, if I can do that then, I could do anything," said Rosetta.

She continued: "I really thank GraceKennedy for the award, not just for me, but for all household workers. One of the things I had always wanted to see is corporate Jamaica doing something for household workers. I would often see in the media something being done for civil servants and I always wondered what happened to the household worker. Thankfully, we are now being recognised."