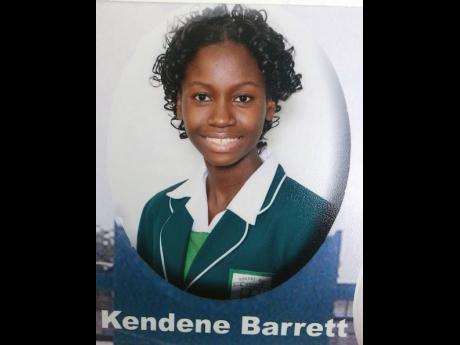 Boasting results of nine grade ones and two grade twos in the Caribbean Secondary Education Certificate (CSEC) examinations, is Kendene Barrett of the Prospect Community in St Thomas.

But as one can imagine, outcomes such as these, do not come overnight.

"My journey to success wasn't an easy one. It had many road blocks, detours, and dead ends, but I was determined to achieve great things. I studied day and night constantly trying to improve myself," Kendene told The Gleaner, noting that she was not always as focused.

According to her: "I hated school work as a child. When everybody else was playing school, I was baking mud pies. My mom saw that there was room for improvement and moved me from my primary school to another institution and then it was full speed ahead ever since."

The Morant Bay High School scholar also revealed that, on her journey, she encountered the stumbling block of fear.

"I've always dreaded exams. No matter how many people believed in me, I just didn't think that I could do it," she said as she began to recount an ordeal she encountered a few years ago.

"I wasn't the best at languages and my grades reflected that. I remember in 3rd form I got 68 per cent on an English test and I felt the world tumbling down."

Kendene compares the experience to that of a scene in a movie.

She said: "There was a deafening ring in my ears, my head felt light, the room was spinning and it's like my world stopped. And right then and there in the classroom, I had a panic attack."

All this was caused based on the student's determination to be the best at all she did and the grade she received on that test was way below the standard she had set for herself even at such an early age.

What she thought was a fear of exams turned out to be a fear of failure. Kendene disclosed that she has always strived to do her best, but would get discouraged when her best was not good enough.

But all that was about to change. The determined young woman was set on overcoming all she dreaded.

She told The Gleaner: "When I was in the fourth grade, my school held a pageant and I decided to enter. At first, I was shy, but I was determined to get over my fear of public speaking and failure, and there was no better way to do that than in the presence of over a hundred people."

"People started noticing me from the first round and on the night of the pageant, I knocked the socks off everyone. I got four of the five sectional prizes. I was awarded with Most Aware, Most Poised, Most Congenial, and Best Dressed," said the former Miss Morant Bay High, adding that the rush she received from the pageant helped her to get over her fears.

Kendene encourages her peers and everyone who is struggling with fears of their own to always do their best.

"Know your strengths and weaknesses and push yourself to the edge but never over the cliff."

The aspiring pharmacist shared a famous quote from Zig Ziglar.

"You don't need to be great to start, but you have to start to be great."

"These are true words because I was not a child who immediately excelled academically, but through hard work, determination, and dedication I am now able to be proud of what I have accomplished," Kendene said.