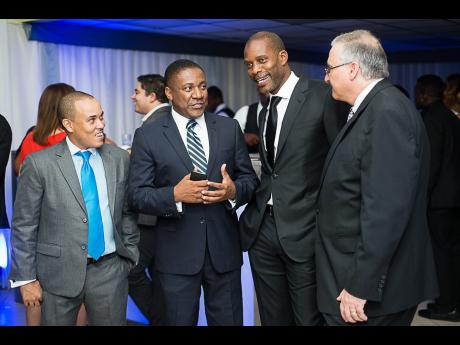 Contributed
Contributed Minister of Science, Technology, Energy and Mining Phillip Paulwell (second left) expresses his approval of the launch of the new FLOW brand in Jamaica. The brand was unveiled to Paulwell and Cable and Wireless partners at the Courtleigh auditorium Wednesday night. Also photographed are: Carlo Redwood (left), head of marketing, products and promotions at FLOW; Managing Director Garry Sinclair (second right) and Andrew Fazio director of business process outsourcing and hospitality for the business arm of the new company, Cable and Wireless Business Solutions.

Minister of Science Technology Energy and Mining Phillip Paulwell has lauded the work done by C&W Communications in Jamaica through its innovative and creative rebranding.

The company, on Wednesday night, unveiled its new brand Flow at a gala awards ceremony for its dealer network and specially invited guests.

Paulwell, who was keynote speaker at the awards ceremony, commended C&W for its ability to stand the test of time and create new market strategies.

The company has been in Jamaica for more than 140 years.

C&W recently acquired Columbus International and is moving to unveil several new products as the company introduces a suite of quad play offerings in Jamaica.

However, Paulwell taking time to examine the expansion of the mobile network in Jamaica, congratulated C&W for changing with the times.

"Cable and Wireless was an important stakeholder in local number portability (LNP). So far, we have had more than 30,000 ports in Jamaica. I won't be partial and say where they should go, but LNP is a reality in Jamaica today and LIME has played a major role," Paulwell declared.

C&W Jamaica has recorded 15,000 subscribers who have come on its network since the launch of LNP in June.

The minister also said the expansion of broadband services has led to the development of the Jamaican society as a whole. He wished the new brand every success as it offers its products and services to the Jamaicans.

In the meantime, Managing Director of the new Flow, Garry Sinclair, noted that the company has been a more robust player in the highly-regulated telecoms market in Jamaica.

He said there are great plans are ahead under the new brand and commended his marketing team for having won 16 prestigious ADDY awards since 2012.