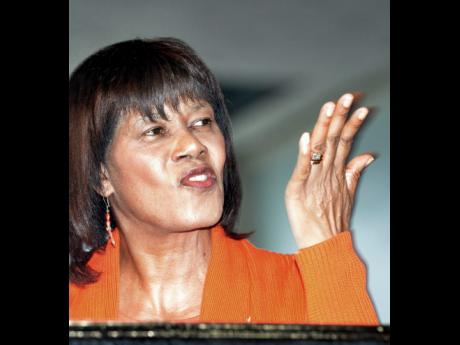 File
Simpson Miller: I am ready. We are ready, and I hope they are as ready as we are. If I say we are ready, then other people going start fret because indeed, we are ready.

Prime Minister Portia Simpson Miller is signalling her party's readiness to go the polls for the impending general elections.

Simpson Miller, who is also president of the People's National Party (PNP), also encouraged the members of parliament and councillors to stay close to the people and not wait for the election date to be announced before they attempt to bond with them.

"I am warning councillors and MPs, don't bother wait till when election time you go round and hug up the people," she said. "Stay always with the people. Once you stay with the people, you will never be wrong for them, and even if you're wrong, they will forgive you. None of us not bigger than the people. Is the people put us where we are and the people can remove us from where we are."

She added: "I am ready. We are ready, and I hope they are as ready as we are. If I say we are ready, then other people going start fret because indeed, we are ready."

Simpson Miller was speaking from the platform during MP Richard Azan's North East Clarendon constituency conference at the Spalding Primary School in the parish Tuesday night.

"I see them trying very hard to provoke me, but I will not be provoked by anyone who does not understand the position of leadership when you're a politician. So if you are elected and you can't lead, how come you want to tell me how to lead. I was born a leader."

While addressing the constituency conference, Simpson Miller also warned members of the party that she would not allow them to make comments that could bring the party into disrepute.

While she did not point to any specific incident, the party has seen various clashes among members in recent times.

"I want to warn our own people. Stop the running up of mouth! We have one noble movement and I'm not going to allow any man or woman to destroy the integrity of Norman Washington Manley's party," she declared.

"Norman Manley paved the way for all of us who come after as leaders, and I want to ensure that I leave it strong, ready, and determined to continue the work."

The party has been attempting in recent weeks to control rifts that have developed as a result of the potential challenges.

Meanwhile, the car tyres of Evon Redman, who is seeking to unseat Raymond Pryce in North East St Elizabeth were slashed by persons believed to be supporting the MP.

And tension in the PNP's Region Six led to D.K. Duncan deciding not to seek re-election as chairman, paving the way for Ian Hayles to take up the post.