Secrets have long slipped into US State Department email 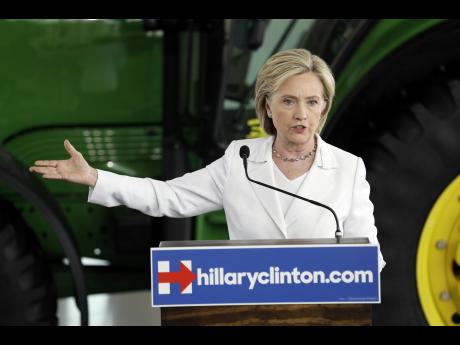 AP
Democratic presidential candidate Hillary Rodham Clinton speaks at the Des Moines Area Community College, on Wednesday, in Ankeny, Iowa. The transmission of classified information across Hillary Clinton’s private email is consistent with a culture in which diplomats routinely sent secret material on unsecured email during the Obama and George W. Bush administrations, according to documents previously made public and reviewed by The Associated Press.

As Hillary Rodham Clinton remains under fire after revelations that material deemed classified was sent through an unsecure home server she was using as secretary of state for email, a review of records by The Associated Press makes clear that the leakage of secrets onto unsecure email is a State Department problem dating to the George W. Bush administration, if not earlier.

The matter has become an issue in Clinton's front-running campaign for the Democratic presidential nomination. And the trend may have accelerated under Clinton as email use became more frequent.

One example: during the deadly 2012 attack on US facilities in Benghazi, Libya, State Department officials in Washington were emailing one another with updates in real time. Embedded in those messages were nuggets of classified information, including an apparent reference to a CIA facility that was a closely guarded secret.

When the emails were released last year, that and other information found to be classified were censored from public view.

Clinton's use of a home server makes her case unique, but it's not clear whether the security breach would have been any less had she used government email. The State Department only systematically checks email for sensitive or classified material in response to a public records request.

Clinton insists she didn't send or receive information marked classified, and there is no evidence she did. But information can be classified without being marked. Government investigators have found material they believe was classified when sent in several dozen of 30,000 emails that the former secretary of state has turned over.

In five messages that date to Condoleezza Rice's tenure as secretary of state during the George W. Bush administration, large chunks are censored on the grounds that they contain classified national security or foreign government information.

In a December 2006 email, for example, diplomat John J. Hillmeyer appears to have pasted the text of a confidential cable from Beijing about China's dealings with Iran and other sensitive matters. Large portions of the email were marked classified and censored before release.

Now released, the emails have been posted on the State Department's searchable reading room.

On the night of the Benghazi attack on September 11, 2012, department officials emailed one another about extraordinarily sensitive matters, including the movement of Libyan militias and the locations of key Americans.

An email from diplomat Alyce Abdalla, sent the night of the attack, appears to report that the CIA annex in Benghazi was under fire. The email has been largely whited out, with the government citing the legal exemption for classified intelligence information. The existence of that facility is now known; it was a secret at the time.

In an email sent at 8:51 p.m. on September 11, 2012, Eric J. Pelofsky, a senior adviser to then-UN Ambassador Susan Rice, gives an update on efforts to locate US Ambassador Chris Stevens, who died in the attack.

The email was marked unclassified when sent. Later, part of it was deemed classified and censored before its release.

Critics have said Clinton and her aides should have known not to discuss anything remotely secret over unsecured email. The emails show they were cognisant of security, routinely communicating over secure phone and fax lines.

Many of the emails to Clinton containing classified information were forwarded to her by a close aide, Huma Abedin. Most, however, originated with diplomats who have access to confidential material. Some emails sent by Clinton have since been censored.

What makes Clinton's case different is that she exclusively sent and received emails through a home server in lieu of the State Department's unclassified email system. Neither would have been secure from hackers or foreign intelligence agencies, so it would be equally problematic whether classified information was carried over the government system or a private server, experts say.

In fact, the State Department's unclassified email system has been penetrated by hackers believed linked to Russian intelligence.

Clinton, speaking to reporters after an event in Iowa, said: "My use of personal email was allowed by the State Department. It clearly wasn't the best choice. I should have used two emails, one personal, one for work. And I take responsibility for that decision."