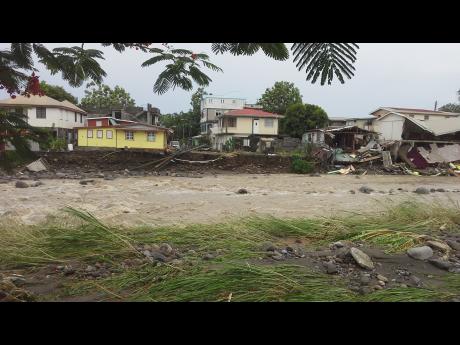 AP photo
A river overflows, affecting some homes along its banks, due to Tropical Storm Erika in Roseau, Dominica yesterday.

Tropical Storm Erika has left a trail of death and destruction in Dominica.

Works and Communications Minister Ian Pinnar has said 14 bodies have been recovered so far and at least 25 other persons are missing.

Prime Minister Roosevelt Skerrit has described the destruction as one of epic proportions.

He says rescue teams from Venezuela, Trinidad and Tobago and the French islands are expected in the island today.

Dominican journalist, Matt Peltier told The Gleaner/Power 106 News Centre this morning that Dominicans were taken by surprise by the overnight rains which brought landslides and flooding.

Peltier says this is the first time since the 1970s that Dominica is experiencing such severe weather.

He says emergency services have been challenged as the worst affected areas are remote and some communities have been cut off.