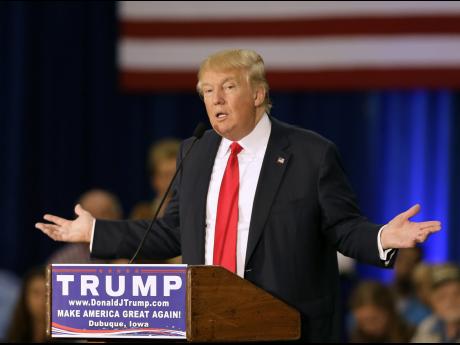 Not only is 2016 Republican presidential candidate Donald Trump an unconventional candidate, he's got a campaign operation that turns the conventional wisdom of electoral politics on its head.

While Democratic front-runner Hillary Rodham Clinton boasts an army of more than 350 paid staffers, Trump's operation fields less than a tenth that number.

It includes a coterie of about a dozen paid staffers operating out of the campaign headquarters at Trump Tower on Manhattan's Fifth Avenue - the same building where Trump lives and runs his real estate empire. His team has no pollster, fundraisers or media consultant and only announced its first full-time, big-name policy adviser this week.

The rest of the 25 or so paid members of the Trump campaign are mostly in the early-voting states of New Hampshire, Iowa and South Carolina, states where the billionaire businessman-turned-reality TV host is ahead in polls, leaving the Republican establishment scratching its head.

"Like the rest of Mr Trump's campaign, we're not following the playbook," said Trump's recently hired national political director, Michael Glassner, who worked for Sarah Palin's vice-presidential campaign. "So what may have been the typical profile for somebody to run a primary or caucus campaign, we're willing to look beyond that, find the people who are the best and the smartest."

The small-scale outfit stands in sharp contrast to Clinton's operation across the river in Brooklyn, where her team, learning from President Barack Obama's successes, has built a data-centric campaign led and staffed by some of the Democratic Party's best and brightest.

Trump's chief Republican contender, former Florida Governor Jeb Bush, is also experimenting with his operating structure, offloading many of the traditional responsibilities of a campaign to a super political action committee led by a long-time Bush confidant. His team, nonetheless, has a sprawling headquarters in a secure building in Miami.

Following a series of staffing shake-ups and high-profile departures, Trump's campaign is now effectively run by two men: himself and his campaign manager, Corey Lewandowski, who is a constant presence at his side. At events, Lewandowski could be easily mistaken as part of Trump's security detail, with close-cropped hair and a wire in his ear.

The Trump operation is showing that the 'typical campaign' run by presidential candidates doesn't work, Lewandowski said in a recent interview. "This has been an atypical campaign from the beginning. And it works and it is working, and he has massive amounts of support."

The growing team so far consists of a mishmash of well-respected and connected early-state insiders and newcomers who appear to be just out of college, or who have never worked on a national or even statewide campaign.

In Iowa, for instance, where he has 10 paid people, Trump snatched Chuck Laudner, a former state party executive director who ran former Pennsylvania Senator Rick Santorum's winning Iowa campaign in 2012. In South Carolina, he's got Ed McMullen, who has been a policy adviser to multiple presidential campaigns.

Others are less seasoned. National campaign coordinator Megan Powers, for instance, appears to have graduated from New York University in June. Her LinkedIn profile lists her experience as director of philanthropy at Zeta Tau Alpha Fraternity and vice-president of the school's college Republican group.

Glassner said the unconventional rÈsumÈs are part of a strategy that makes the campaign effective and that the skill set needed from campaign staffers has changed dramatically over the last 30 years.

"The ability to communicate directly through social media has changed the entire landscape, and I think that's also changed sort of what I would regard as the qualifications for a professional organiser as well," he said,

Glassner and Lewandowski recently went on a staff recruiting mission to Nevada, another early-voting state, and plan to set up a campaign team there, as well as in some Southern states over the coming weeks.

The campaign announced the hiring of Charles Munoz, former deputy state director at Americans For Prosperity's Nevada chapter, as his Nevada state director this week and has brought in more people in New Hampshire and South Carolina.

Lewandowski said he's trying to make sure staff and volunteers in the early states have the resources they need.