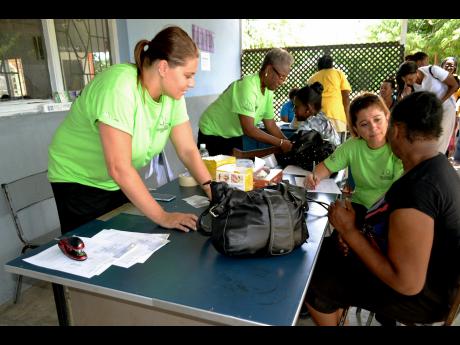 Volunteers tending to residents who came for health services. 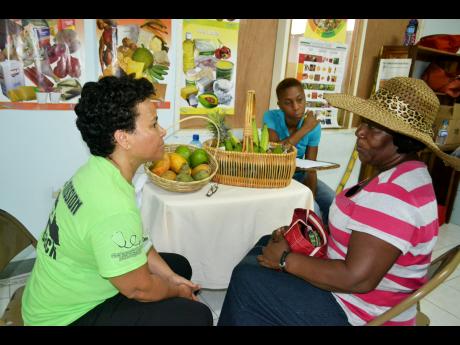 A resident (right) discusses healthy eating habits with a volunteer. 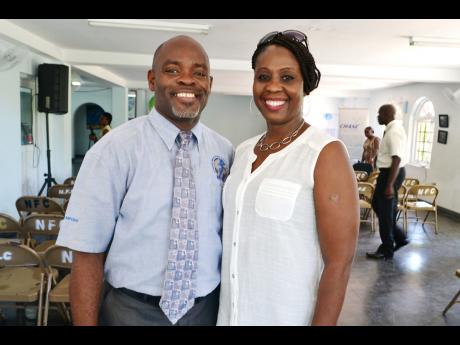 The works of the Northgate Youth and Family Development Foundation (NYFDF), headquartered at White River, Ocho Rios, is set to impact families in more than 100 countries worldwide, if things go according to plan.

The NYFDF, chaired by Pastor Wesley Boynes, was established to help families cope with various problems, such as dysfunctional family systems, crime and violence, poverty, social degradation, and education among others.

Last year the foundation launched its annual Family Health, Wellness, Beauty Fair and Medical Clinic, which was a success, as it provided free or affordable services aimed at the entire family, from kids to seniors.

The health fair also, once again, brought a medical team from the United States, Health Care Professionals Just Giving Back, which consisted of 16 persons, double the number that came last year.

The group's founder, Nurse Rose-Ann Combs, said the reason behind their contribution was to help people become better equipped to take care of themselves.

"I decided that doing a medical mission trip with a team that is able to give back to a community in need and not only giving back, but taking something from them would be a great way of empowering the society," Combs explained.

The efforts of the NYFDF have not gone unnoticed and this year, Empower, a division of Congress WBN, with headquarters in Trinidad and also in London, decided to have a closer look.

Empower basically provides the necessary supervision and management for development projects, and also takes the primary role in locating funds to be directed towards viable community projects throughout developing countries.

The organisation sent an observer, Dr Glasha Frank, to the health fair to see the operations, with a view to replicating it in the more than 100 countries in which it operates.

"It's becoming increasingly clear to us that this initiative here in Jamaica sets a lot of templates and patterns that we can document and replicate and infuse to help support other projects in other countries across the world," Frank told Family and Religion.

"It's really limitless, what can come out of this," she added.

Meanwhile, Boynes in explaining his vision for the health fair, said one of its primary objectives was to promote a holistic and balanced lifestyle for the entire family.

He later told Family and Religion that having established a parenting empowerment place, they realised that one of the needs of the family was health care.

Boynes said: "And not just taking care of sickness, but learning how to take care of themselves and live healthy family lives because we realise that a lot of the illnesses which females and even young children encounter is because of lack of knowledge and ill-advised lifestyles. So we are promoting balanced lifestyle - eating healthy, making sure that children are spiritually developed."

He said the foundation does a lot of parenting empowerment initiatives, working with churches and schools.

"We have male empowerment initiatives as well, both for grown men and also for boys. So it's an all-inclusive approach to developing healthy and balanced families and individuals."

This year, the health fair was again staged for three days, under the theme: "Family Health, Wellness and Beauty: Caring for the Total Man," and attracted scores of persons from White River, Exchange, Content Gardens, and other communities.