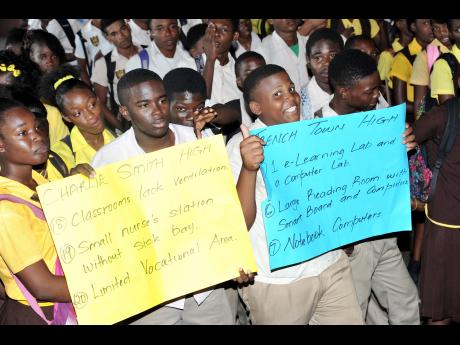 Norman Grindley
In this February 2015 photo, students of Trench Town High School held placards as they were joined by parents and former students to protest against the planned closure of the school. 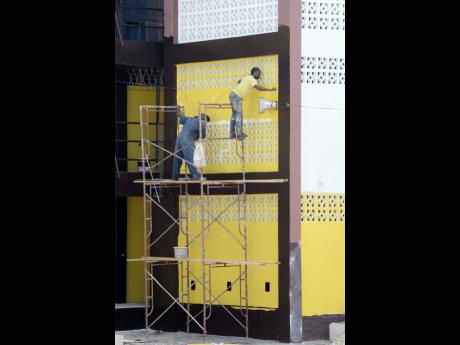 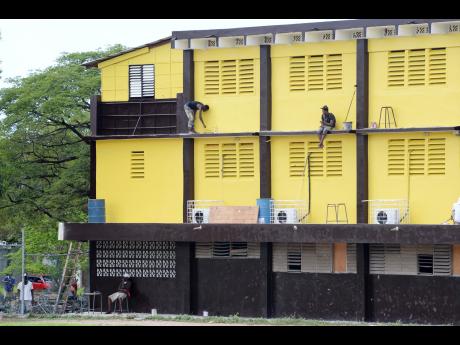 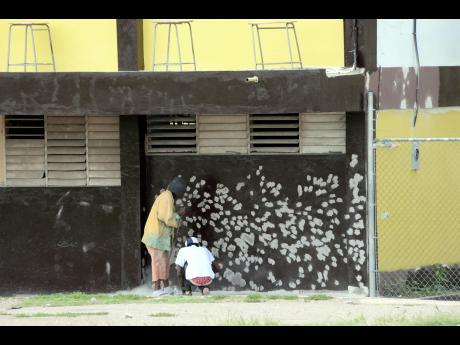 A number of parents and students who vehemently protested the announced merger of the Charlie Smith and Trench Town high schools in the South St Andrew community of Arnett Gardens - popularly known as 'Jungle' - now seem ready to embrace the move as they seek to capitalise on the opportunities being created.

Under the new arrangement, students from both institutions will now attend the Charlie Smith High School, with the 51-year-old Trench Town High School to be rebranded the Trench Town Polytechnic College.

The college is set to be opened around the third week of September and will offer a wide range of programmes from the Caribbean Maritime Institute (CMI), Excelsior Community College, and the Edna Manley College of the Visual and Performing Arts.

Though unclear about the details, the residents, hailed by friends as 'Jungleists', are already making plans to take full advantage of the opportunity.

When our news team visited Arnett Gardens last week, residents argued that the establishment of a college would help to boost the profile of their community, which has been dogged by intermittent gun violence over the years.

"It would be nice to have a college in the ghetto," said Deloris Dockery, whose daughter has been transferred from Trench Town to Charlie Smith.

Dockery was supported by several neighbours in the community who admitted that they had taken issue with the merger initially but had since changed their tune.

"Even the other day we a talk about it because a lot of us leave school and don't have a trade still and we wouldn't mind going back," said Keno as he prepared a box of jewelry for sale.

"I want it (college) come here because I would go back a school because I am tired of sitting down," said another resident who was spotted near the Trench Town High School.

Education Minister Ronald Thwaites told The Sunday Gleaner that the committee tasked with overseeing the merger had been meeting regularly to discuss the way forward and to ensure that both schools are able to meet the needs of the residents.

When our news team visited the Charlie Smith High School last week, workmen and members of staff were out in their numbers stripping paint, sorting through furniture, and putting in infrastructure.

"We are giving it priority and it's one of the schools that we know will offer quality education going onwards," he said.

Executive director of the CMI Dr Fitz Pinnock says that the Trench Town Polytechnic College is set to become a centre of excellence.

Pinnock, who is part of the committee overseeing the establishment of the institution, said a principal has already been identified and they are expecting as many as 500 students.

The CMI head noted that the courses to be offered have been tailor-made for the community following a survey to determine the residents' areas of interest.

Given that several of these courses are offered by the Excelsior Community College and the Edna Manley College of the Visual and Performing Arts, the three institutions will be partnering to meet the educational needs of the residents.

"Coming to the programme, they will do some academic courses. If they don't have the requisite number of CSEC subjects, they will do some and then they get to mix with CAPE subjects, so they get to improve the academics while they are focused on the professional, and then we will do career development skills with them and train them towards the industries," said Pinnock.

Among other things, residents will be trained to become welders, equipment operators, trailer drivers, and to take on jobs in the professional sports industry.

According to Pinnock, given the commitment of the Member of Parliament for the area, Dr Omar Davies, and the education ministry, school fees are likely to be heavily subsidised and residents might be required to only find their registration fees.

"People have been applying and things are happening," said Pinnock.