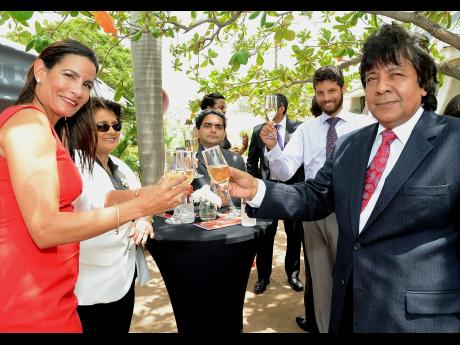 Ian Allen
Members of Guardsman Armoured toast their company shortly after their 50th-anniversary service at the Garrison Church of the Ascension at Up Park Camp. From left are: Renée Menzies-McCallum, managing director; Valene Juggan-Brown; Vinay Walia; Nicholas Benjamin; and Kenneth Benjamin.

Guardsman Armoured Limited has grown from its humble beginnings in the wooden building that it first occupied along South Camp Road to a state-of-the-art multidimensional and multifunctional company spanning 50 years.

The company began as Brinks Jamaica Limited on August 24, 1965 with six clients, one truck, and no vault. Fifty years later, Guardsman Armoured has six vaults in four branches and more than 500 employees and 75 armoured trucks. Their staff members are strategically placed in areas including processing, transit, treasury, maintenance, ATM, ancillary and administrative roles.

According to Managing Director RenÈe Menzies-McCallum, they have added distinct features and services to upgrade their service offerings to their clients. Archival space, she said, has been added because of legal requirements to keep seven years of documents for all clients.

A Track and Trace mobile platform has also been added, which includes a new handheld device and upgraded software that is intended to eventually remove paperwork.

"Paper has to be able to last for up to seven years and the information identifiable. We will have to continue using paper until complete electronic storage is allowed by the courts," Menzies-McCallum said.

Guardsman Armoured has also expanded within the Caribbean region to Barbados and St Lucia, and further expansion is planned for the coming year. The company has also expanded its cash room facilities to locations in Mandeville and Ocho Rios.

"We want to keep expanding our regional footprint by improving and adding to our product line and providing the best service for our clients," Menzies-McCallum said.

The corporate offices were also completed and opened in May of last year. The South Camp Road offices began as a three-phase project in 1994, with the main operations and vault areas completed in 1996. The larger deposit processing room was added in 2006 and when other financial institutions were brought on board.

With 75 trucks across the island, Guardsman Armoured currently services every sector, including banking, retail and government and serves more than 3,500 locations islandwide.

"As a member of the Guardsman Group, our driving core principle is that of excellent customer service. It's not that nothing will go wrong, but someone is always there to ensure that the client's experience is the best," Menzies-McCallum said.

As part of their 50th-Anniversary celebrations, Guardsman Armoured will have two long-service awards presentations, one for staff and one for the client. Other customer and staff-appreciation activities will take place throughout the year.

Guard your Cash this Christmas