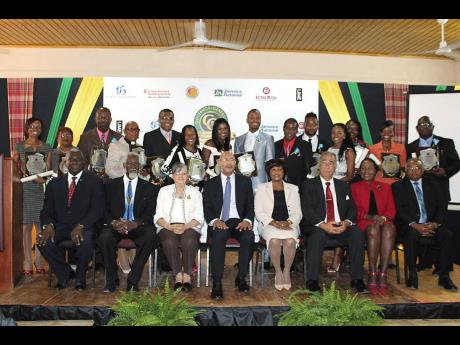 Last Thursday, 14 persons received the Governor General's Achievement Award for Excellence in the field of volunteerism.

All from the Middlesex county, which incorporates the parishes of Manchester, St Catherine, St Ann, St Mary and Clarendon, the recipients were honoured at the Wembley Centre of Excellence in Hayes, Clarendon.

William Shagoury, custos of Clarendon, in his welcome remarks, said the honourees showed that volunteerism is not dead.

He urged the recipients to continue to be inspired. 'There is nothing wrong with Jamaica that cannot be fixed with what is right in Jamaica', was the sentiment which echoed throughout the afternoon.

In his speech, Governor General Sir Patrick Allen told the awardees it was refreshing to have them celebrating what is right with Jamaica.

"Even though there is so much concern and grief over the crime wave which is sweeping across the country, we need to revalue ourselves as a people and a nation."

The governor general also urged all to return to the traditional concept where the village raises the child, education is valued and individuals strive to play their part in nation building.

"These awardees reaffirm our belief that there are enough good people in Jamaica to cause us not to despair, but rather collaborate to keep our country on solid ground," he said.

Junior Dalton Edwards, who has been recognised for his efforts in helping the youth in the troubled community of Bucknor, Clarendon, through his home-based studio and other initiatives, said he was surprised at being recognised.

"I never thought that I would be rewarded for something that came naturally to me. I didn't think people would acknowledge it. I am happy though, I feel wonderful," he told The Gleaner.

The Governor General programme for excellence was this year staged under the theme 'Values Through Volunteerism: Impacting Communities One Community At A Time'.

The awards were presented to those giving their services in the field of education, community service, and volunteerism, among others.