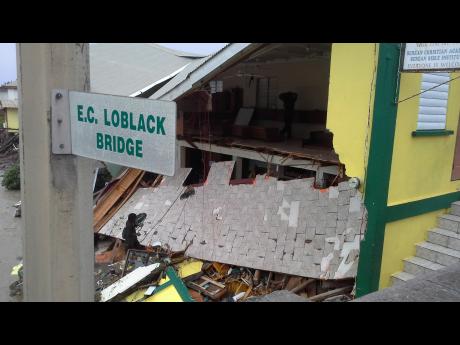 AP photo
The Beran protestant church is partially collapsed due to Tropical Storm Erika in Roseau, Dominica on August 27.

The West Indies Cricket Board (WICB) has said that it is very saddened to hear of the loss of life and damage to property that has taken place in Dominica during the passage of Tropical Storm Erika.

The weather system battered the island on Thursday with heavy rains reportedly causing streets to flood and rivers to overflow.

Official reports have described the destruction as one of “epic proportions”, and as many as 20 people may have been killed.

“It was with great distress and sadness that we received the news about Tropical Storm Erika which has caused loss of lives, injuries and damage in Dominica,” said WICB president Whycliffe Cameron.

“On behalf of the directors, management and staff of the WICB, I would like to convey our heartfelt solidarity with the people of Dominica who have suffered great loss from this natural disaster.”

Dominica is the home of WICB vice-president Emmanuel Nanthan and base for the newly-formed Windward Islands Volcanoes franchise which takes part in the WICB Professional Cricket League.

“Our prayers are with vice-president Nanthan and all Dominicans,” said Cameron. “We are praying that all citizens and residents to Dominica will have the patience and fortitude to deal with the aftermath of this natural disaster.

“While the country and people are undergoing this serious crisis, we want to assure them that the WICB fully understands the seriousness of their loss and is committed to contribute in any possible way to help them overcome the impact of this natural disaster and in alleviating the stress of the affected victims.”

Windsor Park, the international match venue in the Dominica capital of Roseau, hosted the first Test between West Indies and Australia last June.