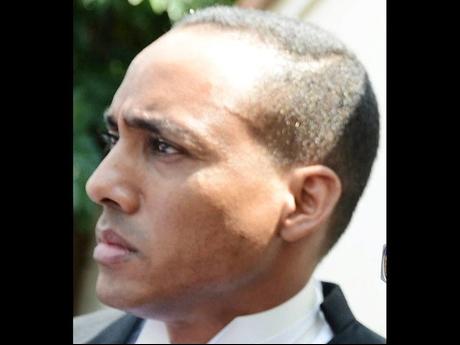 File Photo
Peter Champagnie says he is extremely concerned after his client, Gratino Green, reported that he suffered a fracture to this nose as a result of the beating he received while in police custody.

Attorney-at-law Peter Champagnie says a report has been made to the Independent Commission of Investigations about the alleged beating of a suspect implicated in the death of a police constable.

Champagnie says he is extremely concerned after his client, Gratino Green, reported that he suffered a fracture to this nose as a result of the beating he received while in police custody.

Green is one of two men charged with the murder of police Constable Lynden Barrett in the west Kingston community of Denham Town in July.

The alleged beating came to light when the case was mentioned in the Corporate Area Resident Magistrate’s Court yesterday.

Five weeks ago, Marlon Cherrington, the main suspect in the brutal slaying of woman Constable Crystal Thomas, died from injuries he received while in custody at the Hunts Bay Police Station in St Andrew.

The police report that he was beaten by other detainees and the Police High Command has ordered a top-level probe into that incident.

Champagnie says he has grave concerns for his client's safety in light of Cherrington's death and is using the issue to raise a number of questions.

The prominent defence attorney notes that his client was arrested and charged on August 18, but was not scheduled for court until 14 days later.

Charging that this does not look proper, Champagnie questions whether it is mere coincidence that his client was being taken to court two weeks after his arrest.

He also questions whether Green was beaten because he is accused of killing a police Constable.