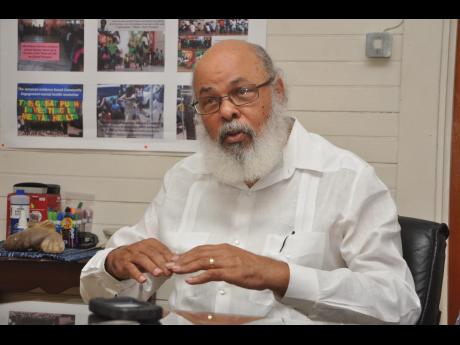 File
Hickling: There needs to be widespread cultural therapy and childhood counselling in schools and families across Jamaica.

A claim of demon possession posited by family members of the 17-year-old boy who stabbed a policeman is being debunked by prominent Jamaican psychiatrist and professor emeritus of psychiatry at the University of the West Indies, Dr Frederick Hickling.

Hickling told The Gleaner that Jamaicans tend to associate demon possession with mental illness because of a religious predisposition.

"Jamaicans associate mental illness with demon possession not only because of inability to understand, but because of a religious mindset that presupposes the existence of demons," he said.

According to Psychology Today, many cultures around the world normally use demon possession as a way to explain away unusual behaviour that may be related to symptoms of mental-health problems.

A 2012 study done in Uganda to investigate alleged spirit possession of child soldiers found that reports of spirit possession were related to trauma exposure such as sexual assault and being forced to kill, to psychological distress, and to higher rates of suicide and post-traumatic stress disorder. The study compared youths who had been abducted and forced to fight as child soldiers in the so-called Lord's Resistance Army - a group that has waged a long and brutal campaign to overthrow the government of Uganda - with youths who had never been abducted.

Hickling has noted that, in almost every case of reported demon possession, the person is suffering from a psychosis where the predominant symptoms are auditory and visual hallucinations and delusional thought processes.

Hickling also pointed out that mental illness among young people is extremely common and is generally associated with exhibitions of anger/rage.

The psychiatrist puts the prevalence of mental illness among young people at a range of 10-15 per cent. This, he says, can be attributed to complex trauma in childhood and adolescence; genetic and metabolic factors.

News reports indicated that the 17-year-old who stabbed the policeman was being treated for anger problems and displayed signs of mental illness.

In this regard, Hickling noted that, "anger/rage is a common feature of many types of mental illness because of paranoid ideas and painful traumatic experiences in childhood and adolescence".

Hickling went on to stress that not enough was being done to address the issue of mental illness among young people.

"There needs to be widespread cultural therapy and childhood counselling in schools and families across Jamaica. We need a complete overhaul of the school and justice systems in Jamaica and a much greater attention to economic development and resilience in young people and young adults," he said.