Pastor Yvonne Ekeoderu: 'God is not worried about gender' 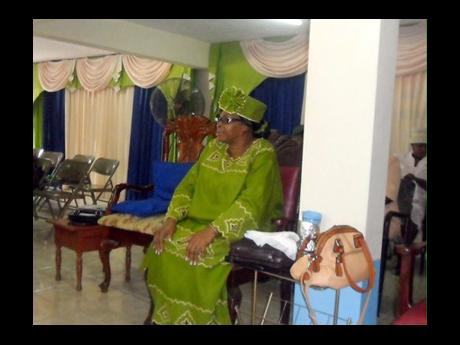 Amid the controversy over whether women should be on the pulpit, Pastor Yvonne Ekeoderu has distinguished herself as a woman on a mission to spread the word of God.

A vocal defender of women preachers, this woman of God made it clear to Family and Religion that her 38 years as a Christian did not happen without an anointing in which she was preaching just weeks after she accepted The Lord.

"The idea of a woman preaching to save souls is not my view, it is the Bible's view. God's choice is that He would put His Spirit in whosoever He will," Ekeoderu told Family and Religion at the end of a lengthy sermon delivered at the Oneness Apostolic Assembly of Jesus Christ in Spanish Town recently.

"God is not worried about gender. He created them in the beginning both male and female so it doesn't really matter what gender you are," added the woman of God.

According to her, there are cases in the Bible where God put His Spirit in a jackass and He spoke to the prophet, and a case where a raven received God's Spirit and was made to feed His prophet.

"So if a jackass and a raven can minister for God, why not women?" she questioned, confidently, pointing out that it is about the spirit and not about the sex of the individual.

Ekeoderu said her journey as a minister of the gospel has been met with many oppositions because there are those who always go against the truth.

"The world is opposed to men and women who speak truth, so the battle is not about women preachers, it is about good and evil, it was so in the beginning, and it will be so in the end," the female pastor stated.

"Don't matter whether you have the highest office in the church, you must at this time, examine your relationship with God, and ensure that you recommit yourself to a private relationship with Him," she told the congregation.

David, she said, fought a private battle and received a public reward when he was appointed to be The Lord's king over His people.

"So private battles produced public rewards," she acclaimed to shouts of Hallelujah from the congregation.

Using her own personal experience, she ventilated to Family and Religion that for the 38 years, she has been involved in ministry, it has never been easy.

"It has never been easy, my relationship with God over the years could not be a public one because there are times when people in the public questions my righteousness, the inner strength that I gained could not come from man, it comes from the uphill struggles as I talk to The Lord," Ekeoderu revealed, using the example of Job to make her point.

Job, she reminded, was stripped of everything including his children, but he maintained a private and personal relationship with God and was publicly rewarded in the end.

She vowed to continue on her mission of preaching the word of God to win souls for His Kingdom, stating that for all her years with The Lord, she has been holding fast because God expects for everyone to live his word in its entirety.

"I am not the one walking with The Lord, he has been walking with me. I am the one who gets tired and my feet get sore, but The Lord never skips a beat," declared the woman of God to Family and Religion.