Sincerity, gratitude, and stability keys to a healthy marriage 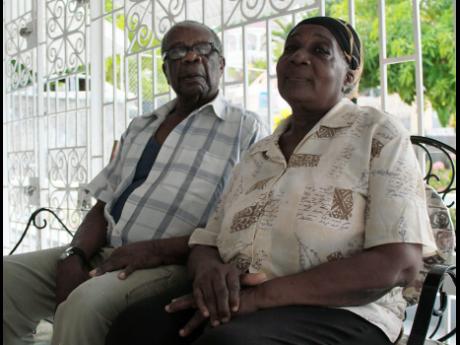 With almost 60 years of loving matrimony to their credit, it's safe to assume that returning residents Clarence and Iona Gay value and appreciate the sacred institution of marriage.

The couple, who retired five years ago and decided to live in Boscobel, St Mary, met at the school they attended in Fellowship, Portland, got married in 1959, and within the following two years migrated to London, England, where they worked and raised eight children before returning to Jamaica.

According to Iona, 76, if a woman wants to develop a balanced and healthy relationship with her husband, she must be appreciative and honest.

"A good wife has to be truthful and have love in her heart to cope with all the situations she will be faced with," Iona told Family and Religion. "Those two things are very important. Without them, you won't reach far.

"If you make a mistake and your husband asks if you did something wrong, say 'yes' because if you say 'no', sooner or later it will backfire and you will look bad when he finds out.

"It's best to always be honest. That way, if anyone comes to your husband and tells him anything about you, he can say: 'I know because my wife told me already. There will be problems here and there, but you have to give and take.

Clarence, 79, agrees that sincerity and gratitude are essential but insists that providing stability is equally important. He said: "My advice to a new husband is to always do what he thinks is right for himself and his wife. Difficulties will always arise and nobody is perfect, so trust and respect are important because you only have each other.

"Make sure you put money on the table every week to maintain the house because if you don't, you'll find yourself in trouble. The best thing is to sort out your finances."

While Clarence has many suggestions about how to maintain a happy and successful marriage, he also acknowledges there is no set formula. He explained: "To be honest, I don't know how we've managed to stay together. It was a struggle, especially when you come from a poor family and start having children.

"After we got married, I was doing OK because I started working in the tourism industry. At that time, (Hollywood actor) Errol Flynn came to live in Portland and was planning to give the river-rafting business a real boost. He held a regatta on the river, and I won the first race. Then I went to England and became a carpenter.

"That was the hardest period - Jamaica in the late 1950s and England in the early 1960s. Back then, it was a real struggle trying to raise a family, but we made it," said Iona laughing.

"Overall, I think marriage is a good thing because it gives you a sense of respectability and security, and it feels nice when you go out and people say 'Hi, Mrs Gay'.

"Even on formal occasions such as job interviews, one of the first questions they ask is: 'Are you married?' If you have children, but answer no, sometimes people look at you a certain way.

"And when your child goes to school, one of the first questions they will be asked is: 'Are your parents married?' It can make them feel a little sad when they have to say no, especially if the other children have married parents.