P.J. pushes for local university in honour of the late Hugo Chavez 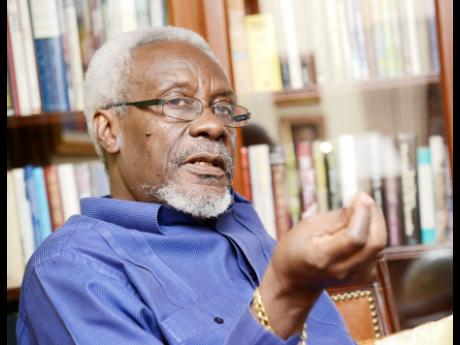 Former Jamaica prime minister, P.J. Patterson, has called for the construction of a university on local soil in honour of late Venezuelan president Hugo Chavez.

Patterson, one of the founding signatories of the PetroCaribe agreement, while speaking at the 10th anniversary summit at the Montego Bay Convention Centre on Saturday night, said the idea for the tertiary facility is one he twice discussed with Chavez.

“We wanted to build in Jamaica; the lands where Simon Bolivar wrote his summons of inspiration to the people of the Americas, a tertiary education [facility] that would offer specialist education in the field of language, sports, culture tourism, environment, maritime training and nursing. Work on the discipline and design has already reached the embryonic stage for what would become now the Hugo Chavez Academy,” Patterson said.

“This would expose the sons and daughters of Simon Bolivar, Jose Marti, Toussaint L'Ouverture and Marcus Garvey to develop fluency in language and hone the skills which blend our economic development and different culture,” he added.

Patterson said further that “despite our financial restrictions, I believe you the leaders who gather here can marshal the monetary and academic resources to build an institution of higher learning. Let it stand as an enduring testimony to Hugo Chavez who, in his short sojourn on our planet, did indeed make a monumental difference on which this and succeeding generations must build”.

Prime Minister Portia Simpson Miller, who co-chaired the summit with Venezuelan President Nicholas Maduro, said it was the dream of Chavez to improve the social, economic and overall quality of life of the people of the region.

“His vision is being fulfilled through the ongoing PetroCaribe Agreement. This enduring legacy of Hugo Chavez lives on,” said Simpson Miller, who also announced that “Jamaica will join other nations of the region in cementing Chavez’ name in the annals of our history in a suitable and permanent way”.

Meanwhile Patterson, in recounting the birth of PetroCaribe, said he and Fidel Castro were invited by Chavez to his suite at the Manhattan hotel in New York, a city where heads of governments had gathered at a special convention to mark the new millennium.

“At the time of high and volatile oil prices and insecure supplies, Chavez sought our views on how best to forge an energy cooperation agreement that will enhance energy security, advance regional economic integration and foster socio economic development for our people,” Patterson recalled.

He said that the pact has served to assist energy-dependent countries throughout the region to uplift and advance the social conditions of the people.

“Chavez was empathic that it encompasses those who have been historically oppressed and downtrodden,” Patterson said.

Launched in 2005, PetroCaribe allows member countries — currently totalling 19, including Venezuela — to purchase oil from Venezuela under preferential terms. Member countries need only pay 60 per cent of the cost of oil up-front, and the remaining 40 per cent paid over a period of 25 years at an interest rate of one per cent.

Simpson Miller said PetroCaribe remains an important mechanism for the promotion of closer cooperation and greater unity among countries in the region.

“It has made major contributions to improving the socio economic development of states through investments totalling just under US$4 billion in 432 social projects to foster improvements in the standard of living of our peoples,” she said.

“The PetroCaribe Agreement continues to ensure the energy security of the countries within our region, promote social and economic development, and foster greater trade and other forms of cooperation. A fundamental objective of the partnership is to promote higher levels of development in order to fulfill the needs and aspirations of our peoples and improve their quality of life,” the prime minister added.