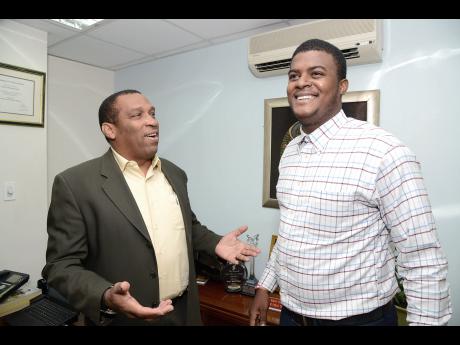 It was more than just an internship for Rajeque Allen when he spent the summer working with Scotiabank. It was a testimony to his reformation and his determination to alter the course his life had taken.

Twenty-three year old Allen was one of 10 participants in the Swallowfield Chapel Youth Reaching Youth (YRY) programme to benefit from work experience in the first of a two-year summer work programme offered to them as part of Scotiabank's 125th Anniversary celebrations in 2014.

The members of YRY were exposed to business practices and ethics through a special eight-week internship summer programme at Scotiabank, working in various units and branches of the bank. Allen spent his time at the Half-Way Tree branch where he worked where needed and got opportunities to work with staff at all levels and assisted customers.

Allen had not been dealt a bad hand in life, but he made a number of poor decisions that ultimately lead to his expulsion from school. Back then, he was a student at Norman Manley High School who felt the need to find his identity by being part of a gang. The first warning should have been when he was suspended for impertinence for slapping another student in the face in front of the principal.

But subsequently, he got into another fight along with his gang and this time a boy was bloodied after being hit by a chair. "There was blood everywhere", he said. That's when he and five others were kicked out of school.

For a while that was fine. He didn't want to be in school anyway and so despite the numerous pleas of his mother and an aunt, he stayed put for a year. In 2012, his reluctance to change was transformed when he started going to church and gave his life to the Lord. His eyes were opened and he began disassociating himself from a number of negative influences in this life, including some of his friends.

Finally he listened to his very concerned aunt, who for years had encouraged him to become part of the Youth Reaching Youth programme. He decided to enroll and found it a bit challenging at first.

"After two years of no structure it was difficult fitting back into a schedule of school, being punctual and organised. But I stuck with it, and in one year passed six subjects. Now I am awaiting the results of five others," Allen said.

"YRY has given me focus and has taught me how to balance me life," Allen said. He is very grateful to the people who have influenced him thus far, and made special mention of the driver Angela Plunkett, affectionately called 'Aunty P', who saw his potential and encouraged him.

"I have benefited from the many opportunities I have been given to share with and teach teens across the island on drugs, sex and sexuality and peer pressure. Gaining this opportunity was a pleasure and I couldn't ask for anything better,' he said.

Now he is looking towards the future. Thanks to YRY and his experience at Scotiabank, Allen's scope has been broadened and he plans to attend university to pursue a degree in business.