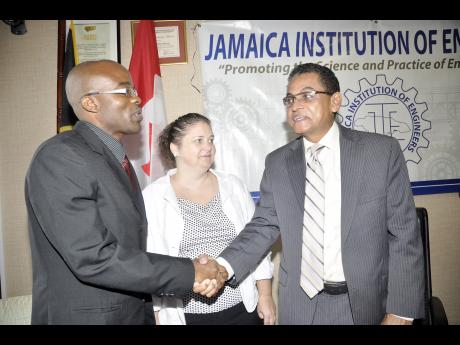 A Building bill to ensure sufficiently planned development, address illegal construction on private and public land and related issues is being finalised by the Office of the Chief Parliamentary Counsel for submission to Cabinet for approval, Noel Arscott, minister of Local Government and Community Development, has said.

Speaking yesterday at the recent press launch of the Jamaica Institution of Engineers (JIE) Engineers' Week 2015, Arscott said that "the Building bill will, among other things, regulate building work, give effect to the National Building Code, facilitate the adoption and application of internationally recognised building standards, as well as the accreditation of building products, construction methods, building components, and building systems."

Engineers' Week, September 20-27, 2015, under the theme 'Engineering for Human Development', is being presented by the JIE in association with the Canadian Society for Civil Engineering and the Bahamas Society of Engineers.

Arscott said that the coming Building bill will promote construction of buildings that are environmentally friendly and energy efficient, create the framework for an efficient system for issuing building permits and certificates of occupancy, establish a fair system for the resolution of building disputes, regulate training and certification standards, license building practitioners, and establish procedures for recognising building professionals.

Explaining the mechanisms through which the new law and regulations will be administered, Arscott said that the Kingston and St Andrew Corporation parish councils and the municipality of Portmore will be the local building authorities for their respective jurisdictions, ensuring that all building work is carried out in accordance with the legislation and the National Building Code.

He noted that some developers have complained that the compliance processes are cumbersome, and promised that, "while compliance will still be emphasised, speed and efficiency are strongly encouraged by the bill".

The Bureau of Standards will have a primary role in administering the National Building Code, while the Building bill will make provisions for a Building Appeals Tribunal, Building Practitioners Board, and Building Advisory Council, the Minister explained.

Noting that "Jamaica's efforts to drive and achieve sustainable development will depend in significant measure on sustained qualitative and quantitative changes in the country's commercial housing stock", Arscott said that the National Building bill will take the country on that path.

Also speaking at the press launch, Andre White, president of the JIE, noted that in order for engineers to fully realise engineering for human and social development, they must be supported by government policy, and "the new National Building Act and the Water Policy (to include rainwater harvesting) are two important pieces of legislation that we need to see put in place".

‘Blame us’ - Phillips accepts that government’s failure to enforce the rules over the years was major contributor to recent flooding
Eyes on the prize! - Hanna, Arscott avoiding internal squabbles as they aim for PNP vice-president posts
Picking on Portia - Simpson Miller is to PNP as Bolt is to track, says Arscott