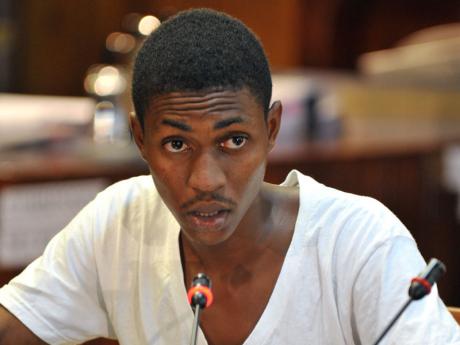 Norman Grindley
Romaine Walker: "The yard was mainly dirt so when the thing fell in the yard a lot of stone and dirt rise up in my face."

A resident of Tivoli Gardens today provided the west Kingston commission of enquiry with photographs of an explosive device he claimed was found in a neighbour's yard a month after the police-military operations in his community.

Romaine Walker said the device was taken to the Office of the Public Defender where photographs were taken before it was handed over to the Bureau of Special Investigations, the police division charged with probing the circumstances under which more than 70 persons lost their lives in the operation.

Walker recounted that he was in his Lewis Path home on May 24, 2010 when he heard several "loud explosions" that were "different from the normal gunshot." In this April 24 file photo, a bullet-riddled building is shown in Tivoli Gardens.

"The first set (of explosions) was coming from the Lewis Path (and) Chang Avenue section (of Tivoli Gardens) and each time the device fell to the ground the whole place shake," he said in response to questions from the commission's senior legal counsel, Garth McBean.

Walker said he climbed a wall to see what was happening and saw three of his neighbours laying in the road with various injuries.

He said one of them, Karl George Henry, was bleeding from the head and crying for help.

Walker, then 21 years old, said shortly after, another explosive device fell in the yard next to his house, which was occupied by his neighbour Michael Williams.

"The yard was mainly dirt so when the thing fell in the yard a lot of stone and dirt rise up in my face," Walker recounted.

He said a month after the operation Williams told him that he found a mortar shell in his yard.