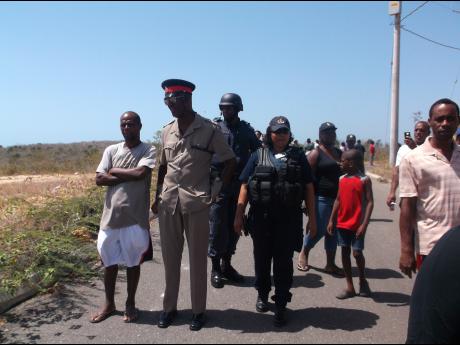 File Photo
In this June file photo police visit the Longville Park Housing Scheme in Clarendon after the reported rape of a woman.

After years of complaining, the Longville Park Housing Scheme in Clarendon is to get a police station.

Recently, residents renewed their bashing of the police and the National Housing Trust (NHT), which is responsible for the scheme, about the lack of a permanent police station.

They complained that the absence has resulted in several crimes especially robberies being committed in the community over the years.

In response to the recent outcry, a temporary police post was established in the scheme.

Minister with responsibility for Information, Senator Sandrea Falconer, has since indicated that Cabinet has approved a contract valued at $72.2 million to construct a permanent police station.

Senator Falconer, who was speaking at a Jamaica House media briefing in Montego Bay, St James last Friday, said the station will enable the police to be more responsive to the security concerns of the residents.

She said the police station will be located on two acres of land and construction work is expected to be completed within the next six months.