T&T's new PM to be sworn in tomorrow 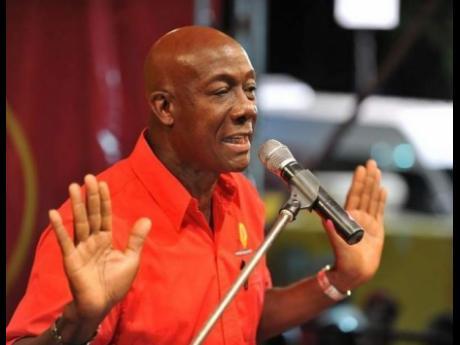 File Photo
Dr Keith Rowley will be sworn in as the sixth prime minister of Trinidad and Tobago tomorrow.

Dr Keith Rowley will be sworn in as the eighth prime minister of Trinidad and Tobago tomorrow following his People’s National Movement (PNM) victory in the general election yesterday.

Rowley, 66, will take the oath of office before President Anthony Carmona at a ceremony to be held at Queen’s Hall at 1.30 pm (2:30 pm Jamaica time).

Rowley, who met with President Carmona on Tuesday, said that the Attorney General will be an elected Member of Parliament.

The Trinidad and Tobago Chamber of Industry and Commerce in a congratulatory message said it was looking “forward to forging successful links and collaborating with this newly-installed administration, by ensuring, in the main, that the interests of the business community are served in a manner that benefits our valued members and the country as a whole.

“We urge Dr Rowley and his new administration to be proactive in placing critical issues on the national policy agenda, early in its tenure. In fact, all officials, elected or appointed to represent our people in the next Parliament, must do their respectful part in re-focusing all efforts on key matters of national interest and working for the common good of our country.”

The private sector group said that global indicators suggest that challenging times lie ahead for local  economy, while crime and corruption are but a few of the other concerns requiring speedy and informed attention.