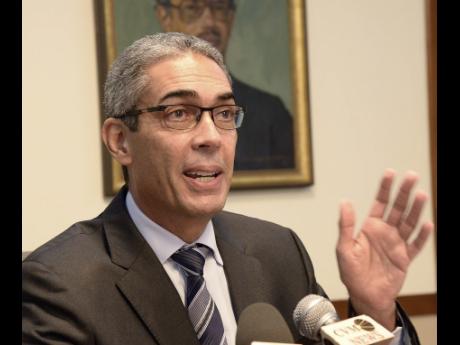 File
Byles ... EPOC hopes the authorities will be able to maintain the momentum in tax revenues for the remainder of the year.

The Economic Programme Oversight Committee (EPOC) has indicated that two months into the current quarter the government is exceeding some of its budgeted targets.

EPOC said at the end of August, the Net International Reserves had already surpassed the target for the entire September quarter at US$2.56 billion compared with the US$1.44 billion targeted.

The primary surplus also stood at $27.8 billion compared with the $23.8 billion budgeted.

The primary surplus in the difference between revenues and expenditures except debt payments.

However, at a media briefing today, EPOC co-chair, Richard Byles, said revenue performance for the first four months of the fiscal year is slightly below the target, with a shortfall of $82 million.

Sign up for The Gleaner’s morning and evening newsletters.
EPOC co-chair, Richard Byles.

Byles says EPOC hopes the authorities will be able to maintain the momentum in tax revenues for the remainder of the year.

Jamaica is awaiting a meeting of the board of the International Monetary Fund which is expected to complete the country’s ninth review in late September.

A positive review will result in the release of about US$40 million under Jamaica's deal with the fund.