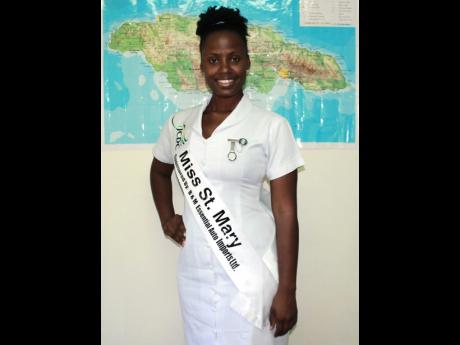 Historically, contestants from St Mary tend to excel in the Jamaica Culture Development Commission (JCDC)'s annual festival queen competition, particularly in the best performance category, which girls from the parish have won three times in the last four years.

True to form, at the national finals held earlier this month in Kingston under the theme 'Proud and Free, Jamaica 53,' Lazan Frazer from Hamilton Mountain in St Mary was awarded the coveted trophy for her speech presentation titled 'Free It Up'.

Frazer, who turned 25 recently and works as a nurse at Annotto Bay Hospital, insists the oration, which challenged the Government's approach to the decriminalisation of marijuana, found favour with judges and the audience because the topic was both timely and thought-provoking.

She told Rural Xpress: "The idea was to do something topical, but different, so I performed as a Rastaman who was telling the 'bigger heads' to free up the marijuana.

"Originally, I had planned to perform as a DJ called Culture Bop and do something about St Mary's culture, history, music and food. But at the rehearsals in Kingston I realised a lot of the other contestants were doing something similar, so I took a piece that had been performed by another St Mary contestant, Leesa Sutherland, and made it my own.

"It was a total transition from the character of a DJ vibesing on stage to a Rastaman who is serious and not smiling, but I practiced every day and love the stage, speech, drama and performance, so I wasn't nervous."

Frazer says she has learned much about her country and heritage since entering the Festival Queen competition four months ago and recommends that young women who want to learn more about their culture should consider entering the JCDC's contest.

"After leaving university, my aim was to help develop my local community and try to have an impact on the young people in the area, and so I entered the competition because I wanted to expand my cultural awareness and knowledge.

"It helps you develop as an individual and encourages you to read, learn and analyse what is going on locally and internationally, so you can have an informed opinion. I would tell any young lady interested in entering to 'Go right ahead,' but don't go with the 'I want to win' or 'I need to be the festival queen' mindset.

"Go with the mindset that you need to develop culturally because then you'll open up to learning so much that over time, it will become inevitable that you will go far, either in the competition or as an individual."

In the next few months, Frazer plans to roll out a school-based project, the I Respect Me School Tour, which will help target young people in St Mary with an innovative personal development programme and establish her as a parish ambassador.

She explains: "I'm planning to tour the 11 high schools in the parish with a project that's about self-worth, self-value and self-respect. The aim is to hold a series of competitions and then choose a winner who will receive a $50,000 cash prize towards their school culture club.

"As part of my reign, I'd really like to boost support for culture clubs and help to be a part of the growth in my parish."