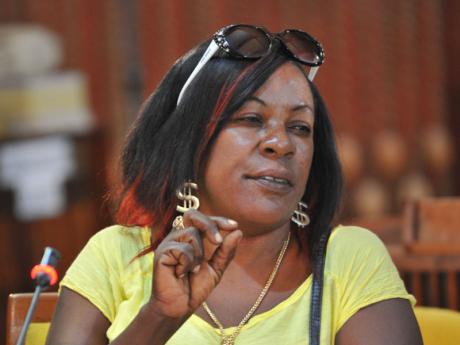 Norman Grindley
Marshall ... I am not going to say I didn't know him, I know Dudus. I am not his friend, but I socialize with him, he is so nice.

A resident of Tivoli Gardens today told the West Kingston Commission of Enquiry that she wished drug lord Christopher 'Dudus' Coke was still in the community to keep the peace.

"At the murder rate now (in Tivoli Gardens) you can't even walk in peace. Of course I wish him was still there to continue keep the peace," Annette Marshall testified during cross-examination by lead attorney for the Jamaica Constabulary Force, Deborah Martin.

"We would sleep wid we door open. We wouldn't wake up and hear say dem rob da man deh (and) the market would a full back wid market people," Marshall added.

The long time Tivoli Gardens resident, however, insisted that she did not know how Coke was able to keep the peace in his west Kingston stronghold.

Marshall said when people in the community had a problem they would go to Coke and if he could assist he would.

"If he couldn't assist he would send them to Denham Town (police station)," she testified.

Marshall also told the commission that police personnel at the Denham Town Police Station would send citizens to Coke to resolve issues.

Unlike other residents in her Tivoli Gardens community, Marshall openly acknowledged that she knew Coke.

"I am not going to say I didn't know him, I know Dudus. I am not his friend, but I socialise with him, he is so nice," Marshall testified before the West Kingston Commission of Enquiry.

The three-member commission is probing the conduct of the May 2010 police-military operations aimed at capturing Coke.

However, in most cases, residents in Coke's Tivoli Gardens stronghold who have testified before the commission have maintained that they only knew of the convicted drug kingpin.

Marshall also recounted how Coke "straightened out" her son after he got into trouble at school and later refused to attend.

"Prezi (Coke's nickname) heard about it and got him into Tivoli Gardens (high school) and on the football team and him (Coke) programme him (her son) and from that him don't smoke or do nutten like that," the long time Tivoli Gardens resident said.

Coke is now serving a 23-year sentence in the United States  on drug and and gun charges.