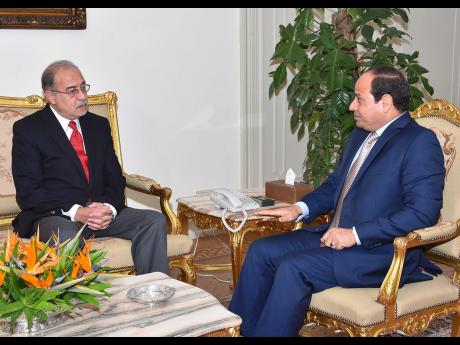 Egypt's government resigned today in the face of intense criticism from state-friendly media that reflects growing discontent but stops short of faulting President Abdel Fattah el-Sissi, the former general who led the overthrow of an Islamist president two years ago.

The office of the president said he accepted the resignation of Prime Minister Ibrahim Mehleb and his Cabinet, but that the ministers would continue to serve until a new body is appointed.

Prior to handing in his resignation, Mehleb provided a report detailing the performance of the government, which two officials from the president's office said el-Sissi found "unsatisfying". The officials spoke on condition of anonymity because they are not authorised to brief reporters.

Egypt's president is generally in charge of major affairs of state while the prime minister, whom he appoints, handles day-to-day running of the government.

El-Sissi in recent months has had to perform tasks that normally should fall to Mehleb, such as arranging meetings with ministers and negotiating business deals with foreign investors, according to the two officials.

Mehleb also failed to pressure his ministers into following through on memorandums of understanding that el-Sissi signed during a much-publicized economic summit in March, they said.

The country's private media, while lavishing praise on el-Sissi, have slammed the government in recent weeks, accusing ministers of incompetence and of being out of touch with ordinary citizens suffering from years of turmoil since the 2011 uprising that toppled longtime autocrat Hosni Mubarak.

"El-Sissi and the armed forces are responsible for the accomplishments we see," said Ibrahim Eissa, a prominent journalist and popular TV host, who called Mehleb and his Cabinet a "burden" on the president. "All of the ministers that failed were Mehleb's choices," Eissa told viewers earlier this week.

The government suffered a major blow when Agriculture Minister Salah el-Din Helal was detained Monday after tendering his resignation amid an investigation into allegations that he and others received over $1 million in bribes.