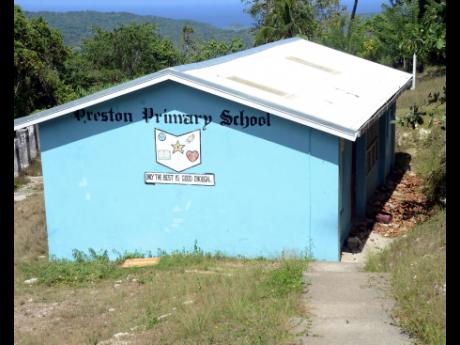 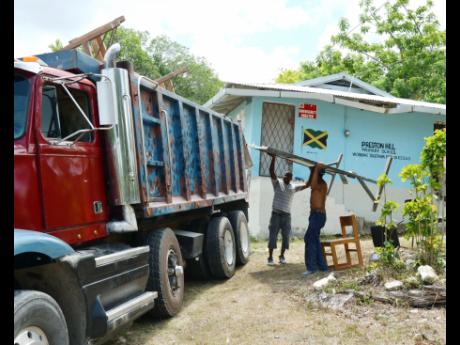 Ian Allen
The final rites being administered by workmen who moved the furniture and equipment from the closed Preston Hill Primary School in St Mary. 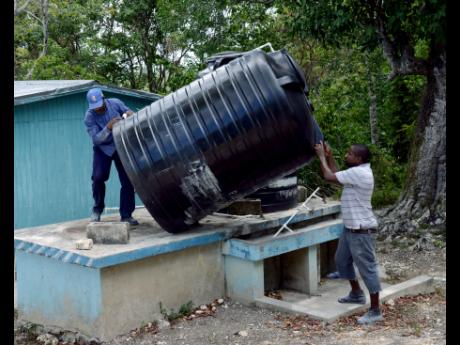 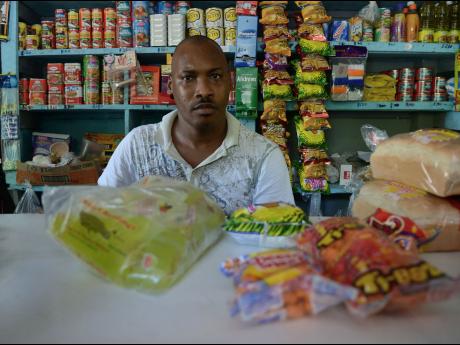 Ian Allen
Nicholas Shirley in his shop in Preston Hill, St Mary mourns the closure of the school which provided many of his customers.
1
2
3
4

Packed with chalkboards, educational charts, desk and chairs, the truck parked at the entrance of the Preston Hill Primary School in St Mary signalled the end of an era for Dorrette Sommerville and her neighbours, who watched helplessly from a far.

In just a few hours, the two men loading the truck managed to stockpile years of hard work and the cumulative creative efforts of staff under the careful watch of an employee from the Ministry of Education.

In the truck were books, maps, charts of the body, and a variety of inspirational quotes, historical facts and life lessons splashed across colourful cartridge papers.

Earlier that day, Sommerville had placed her daughter on a bus headed for the Hampstead Primary School at the Govern-ment's expense.

Unlike her mother and five siblings, the nine-year-old was not given the opportunity to complete her primary-level education at Preston Hill, which was one of about 18 schools ordered closed by the Government prior to the opening of the new school term. The school's population was just too small to warrant its existence, and all the students were transferred to Hampstead a few miles away.

"Mi born come see this school. Even my bigger brother and sisters them, who up in them 50s, more nearer to 60 right now, come to this school. I have nephews go there, nieces go there," Sommerville told The Sunday Gleaner.

The actual age of the school is unknown, but you would be hard-pressed to find anyone under 55 years old in Preston Hill who had not, at one point, attended the little blue school on the massive plot of land in the central St Mary community.

The moving team worked feverishly under the watchful gaze of the country's seven national heroes painted on the school's wall. Inside, there were murals of trees, hanging charts with letters of the alphabet, story boards, metal cupboards, collages, and even a huge spider-man sticker pasted on the wall.

The small desks and chairs which were occupied by children last year about this time were now empty and the fruits from the guinep and ackee trees outside fell to the ground unmolested by small hands.

One of Sommerville's fondest memories attending Preston Hill Primary, was being able to roll from one tree to the next in a tyre during her lunch breaks.

Claudette White, who was spotted under a tree nearby the school, is also a past student, and she, too, boasted about some of the good times she experienced while attending classes.

"We used to have sewing classes, and the boys them used to have farming, and we the girls sometimes used to do farming," said White.

As she spoke, two other women chimed in, and they all praised the efforts of the staff at the school for going above and beyond for their students. The school, they said, also helped to galvanise the community, as past students would generally return every two years to host a reunion and provide resources such as computers to the school.

One issue for Carlene Campbell is that these computers, that were purchased specifically for the school, were likely to be given to other schools.

"I think all the computers over there should remain in the community because it's the community people who are away who donated them to the school. I don't think the government should get those computers," said Campbell.

She argued that the school should be transformed into a computer centre for the benefit of residents.

However, counsellor for the Hampstead Division, where the school is located, Barton Oliver, said he was told that there are plans to have the building transformed into a centre for the Jamaican Foundation for Lifelong Learning to offer remedial classes.

But even as the debate over the future use of the building continued, Nicholas Shirley has a more immediate concern: he is being forced to come to terms with the fact that he has lost more than half his usual lunchtime customers.

"The kids them used to really, really come around. Things are not good for me now at the moment," he said.

Unlike most of the residents of Preston Hill, he had not attended the little blue school which is a few houses away from his shop. However, he understands the community's loss, since his school in Preston Land a few miles away had also been ordered closed by the education ministry for this new school term.

When The Sunday Gleaner team visited the Preston Land Primary School, we were greeted with closed doors, loaded fruit trees, and the persistent barking of a dog that stood guard at a gate.

This school was smaller than the one in Preston Hill, and it seemed the moving truck had not yet passed through, since a peek through the window revealed blackboards and well-stocked book shelves, while outside were valuable assets such as two huge black drums and a cylinder.

"My experience was good at Preston Land School," said Shirley.

"It was a whole heap a kids. Lunch time we had cricket, football and everything that kids used to play like 'stuckie' and those things," he said.

He feels that there should have been more consultation with residents before the two schools were closed, although he agreed that the population at both schools had drastically fallen due to the migration of several residents over the years.