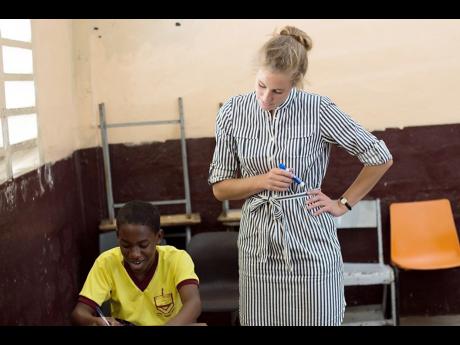 Contributed
A student gets attention from Rhodes Scholar Helen Baxendale at the TEACH Caribbean summer camp for students of Islington High and Brimmer Vale High in St Mary. 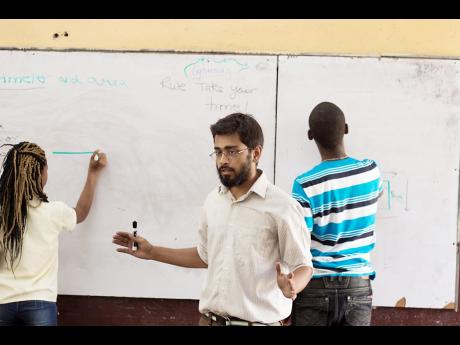 Contributed
Raag Yadava, a Rhodes Scholar from India, teaches geometrical concepts during a math class at the TEACH Caribbean summer camp for students of Islington High and Brimmer Vale High in St Mary.
1
2

The initiative, TEACH Caribbean, began in 2013 with students from the Mile Gully and May Day high schools; and continues to work with a pool of students who enter the programme the year after they complete grade seven.

The students were taught by a mix of local teachers and Rhodes Scholars enrolled at Oxford University in England, who teach maths and English. This year, the five-week camp was held from July 13 to August 14.

The 2015 summer programme was expanded to the Brimmer Vale and Islington high schools in St Mary, with support from the Jamaica National Building Society, which selected the schools from five participating in the JN Foundation's iLead educational leadership programme. Funding was also provided by the Insurance Company of the West Indies.

"The biggest improvement for the students was in maths, with students from Manchester leaping from four per cent to 72 per cent; while in St Mary, they advanced from just about 30 per cent to 67 per cent," disclosed Mariame McIntosh Robinson, Rhodes Scholar and founder of TEACH Caribbean.

She noted that the programme has been targeted to the schools in an effort to increase support for rural non-traditional institutions, which receive less support than urban schools with similar challenges.

Performance in English Language improved on average from about 61 per cent to 72 per cent among students enrolled in the Manchester programme, while students in St Mary increased their performance in weak areas from approximately 37 per cent to 68 per cent.

"There were students who moved from zero per cent to more than 90 per cent in both subject areas," reported Nicole Clarke, manager for the St Mary programme. "Therefore, we are really very pleased with the students' improvements. We also anticipate that they will continue to perform well during the course of the school year and, ultimately, in the 2017 CSEC examinations," she said.

In addition to focusing on topics the students struggled with during the previous school year, they are also introduced to new areas of maths and English that will be taught during the upcoming school year.

"When I return to school in September, I'll be ahead of the class," said a confident Jamar Gordon of Mile Gully High School, "because what I learnt is what others, who are not a part of this programme, will need to learn."

For many of the students, the main influence on their improved performance was the increased feedback they received from teachers.

An effort to make the concepts and elements of maths and English relatable also helped with their understanding of the subjects.

"One of the biggest problems for the students is rote learning," Raag Yadava from India observed. He was one of two Rhodes Scholars who volunteered to teach the Brimmer Vale and Islington students.

"The kids know the formulae, and they know exactly how to solve the questions; however, they are not sure why that's the case. Therefore, if you take a very standard question and change a very basic fact about it, then they are completely thrown off the mark.

The moment you relate to things they do naturally, then they start getting a little more excited and they start understanding."