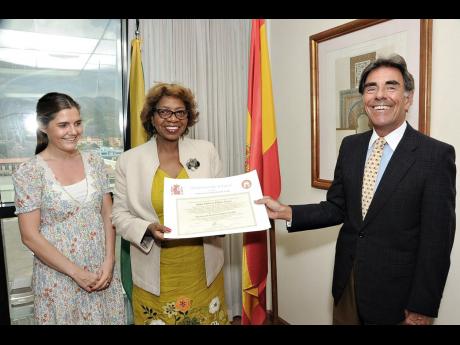 Contributed
Dr Patricia Green (centre), the first from the English-speaking Caribbean to receive a PhD from the University of Seville, accepts her doctoral certificate in Architecture from the Ambassador of Spain to Jamaica, His Excellency Aníbal Jiménez Abascal (right). Sharing the moment is Deputy Head of Mission in the Embassy of Spain, Carmen Rives Ruiz-Tapiador, at embassy in St Andrew. 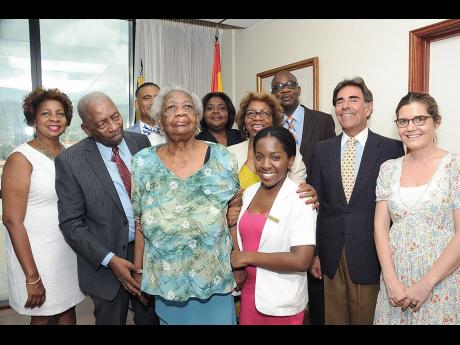 Contributed
Ambassador of Spain to Jamaica His Excellency Ambassador Aníbal Jiménez Abascal (second right) and Deputy Head of Mission in the Embassy of Spain, Carmen Rives Ruiz-Tapiador ( right), celebrate with Dr Patricia Green (back row fourth left), her parents Leonard Green Snr and Stephanie (second and third left) and other members of the Green family following the presentation of the doctoral certificate in Architecture to Dr. Green at the Embassy recently. Head of the Caribbean School of Architecture at the University of Technology (UTECH), Dr. Green is the first from the English-speaking Caribbean to receive a PhD from Universidad de Sevilla (the University of Seville), one of the leading universities in Spain.
1
2

Patricia E. Green, historic preservationist and head of the Caribbean School of Architecture in the Faculty for the Built Environment at the University of Technology (UTech), was recently officially presented with her doctoral certificate in Architecture from the University of Seville by Spanish Ambassador Anibal Jimenez Abascal.

Dr Green is the first from the English-speaking Caribbean to receive a PhD from Universidad de Sevilla, one of the top-ranked universities in Spain.

The degree was presented at a special ceremony at the Spanish embassy in St Andrew, attended by her parents Leonard and Stephanie Green, as well as other family members.

In making the presentation, Ambassador Jimenez made reference to Spain's uniqueness in relation to architecture, heritage and environment and outlined the beauty and history of Jamaica, in particular Seville in St Ann. He also mentioned the links between Jamaica and Spain, including "tourism and the outstanding bilateral relations existing today".

Dr Green's thesis was titled, 'Sustainable Development in the Conservation of the English Caribbean Cultural Landscape: The Caribbean Vernacular and the Role of the Spanish Architectonic Heritage of the Islands of Jamaica, Trinidad and Tobago'.

"My research and work were on the Spanish period of the English Caribbean territories from 1492, covering the periods that they were under Spanish rule. Sevilla is the city where the Archivo de Indias is located and it is the repository of the largest collection of original documents on the exploration and settlement of the Caribbean and the Americas," Dr Green said.

She added, "In addition, I received an international doctorate from the university as a special award, because my research was carried out internationally."

A practising architect for more than 30 years, Dr Green is an expert in historic preservation and the conservation of heritage and the environment for cultural heritage tourism. She has worked in Jamaica, the Cayman Islands, Grenada and other Caribbean territories and served as an international consultant to the United Nations Educational Scientific, and Cultural Organization (UNESCO) World Heritage Centre, and for the International Council on Monuments and Sites (ICOMOS).

She completed studies in professional architecture from the Architectural Association School of Architecture in London and her MSc in Historic Preservation at the University of Pennsylvania, among other qualifications.