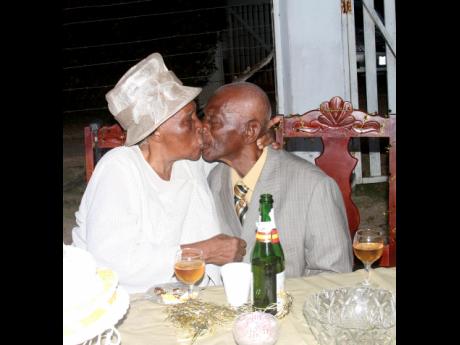 Richard Morais
Younger couples being taught how it is done right by Mr and Mrs Elkanah and Beryl Gillings during the function to celebrate their 50th anniversary at their home in Bounty Hall, Trelawny on August 28. 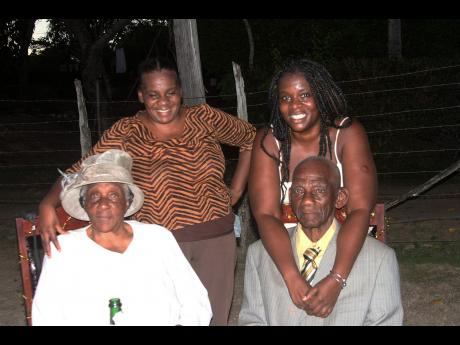 Richard Morais
Elkanak and Beryl Gillings (seated) with two of their five children Joan Miller (left) and Nardia Gillings at the celebration of the couples 50 anniversary at their home in Bounty Hall, Trelawny on August 28.
1
2

It is 50 years of marriage for Elkanah and Beryl Gillings, affectionately known as Brother Dan and Sister B of Bounty Hall in Trelawny. The celebrated on , August 28, with family, friends, and well-wishers.

"God told me to marry you and his reply was the same," is the explanation Mrs Gillings gave about the marriage. Both noted that they had clear revelation from God that they were to marry each other, and while this is correct thing to say in such an interview, their lives are filled with stories where God has worked miracles.

Brother Dan, who confessed that his favourite drink was white rum and cow's milk, said, "One night, I was in my rum and went to the Falmouth New Testament Church where a crusade was being held. The preacher called me by name and said, 'God can still kill'."

He noted that it resonated with him and the next day he went back to the service and went to the altar. He said the minister prayed for him and he gave his life to God. He said he instantly gave up drinking and smoking. That was more than 50 years ago.

"I had 20 packs of cigarettes and I went and dumped them," he said. He added that some of his friends who drank and smoked with him chastised him for dumping the cigarettes saying that he should have given them. He said he dumped them because his conviction was that smoking was against the will of God.

Sister B told of walking with her husband and distinctly hearing a voice saying, 'You will overcome'. She said she heard it twice and when she asked her husband if he heard the voice, his response was in the negative.

While God gave His revelations, they had to live in the real world. Mrs Gillings said life wasn't easy while revealing that they had four children in five years. She said that even if they were rich, it would have been a physical challenge, never mind them being 'poor people'.

She recalled, humorously, how her husband came in from work one day while she was washing clothes and some household chores were not done. She said that he enquired why the household work was not completed to which she replied, "I only have two hands and the two hands are presently washing." As she chuckled, she said her response was to solicit help from her husband.

She said that while money was limited, they made the pledge that food must be on the table, therefore, if sacrifices were to be made, it would have to be on something else. She said her husband would never come home without a little bag with something to eat.

They recalled the struggles they went through to build their house which took three years to be completed. They said they sought no loan and when the house was finished, after living as tenants for 35 years, they wept. Brother Dan is now 85 and Sister B 81 and they again repeated that the living a Godly life is the key to the marriage's longevity.

Brother Dan, who was originally a shoemaker, went on to serve the Falmouth Hospital as a porter for 40 years. His wife has always been a housewife for their five children; she is currently the president of the Bounty Hall Senior Citizen Association. They are also both deacons at their church, the Bounty Hall New Testament;

The 50th anniversary celebration was held at their home on August 28. The couple was married in 1965 at the Falmouth New Testament Church. Some of the persons paying tribute include Pastors Gregory Haughton and Sonia Seivwright, present and past ministers of their church, respectively. Other tributes came from Berdie Phillips, Rev Fairweather, and Sylvan Solomon who did a song. The function was cheered by Mrs Evadney Jarrett, who was a bridesmaid at the wedding 50 years ago.