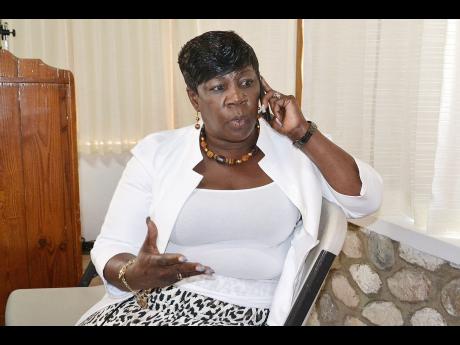 Robb-Oddman ... The Education Minister Ronnie Thwaites yesterday sacked her because of the manner in which she handled the situation in which an 11-year-old child died.

The Jamaica Teachers’ Association (JTA) has issued a statement “fully” endorsing the sacking of Vinette Robb-Oddman, the chairman of the board of the Prickly Pole Primary School in St Ann.

According to the JTA, school boards play a critical role in the education system and appointees should have the education of the nation’s children as their sole agenda.

The Education Minister Ronnie Thwaites yesterday sacked the board chairman because of the manner in which she handled the situation in which an 11-year-old child died while preparing to board a bus that was heading to the scene of a demonstration.

In the meantime, the Opposition Leader Andrew Holness says the entire matter is “stink” with corruption. “There is a conflict of interest, when Lisa Hanna, the Member of Parliament against whom the protest staged in the vicinity of the school was launched, is also the minister responsible for the Child Development Agency (CDA),” Holness said.

He said the CDA was tasked by Hanna to confirm that the death of the child was a result of the protest which involved children of the Prickly Pole Primary. “It is also curious that the Minister of Education would act so expeditiously to dismiss a school board chairman, who, based on public utterances is staunchly opposed to his cabinet colleague Minister Hanna, without the full administrative process of hearings and independent investigations being followed,” Holness said.

He said on the surface, dismissing the board chairman may be appropriate; however, the minister should avoid any appearance or suggestion of political partiality or conflict of interest which could be the subject of a judicial review of his actions. This is also against the background that we are not aware of the Minister ever dismissing the chairman of a school board in the face of equally or even more egregious conduct.”

Holness while expressing sympathy to the family of the child said the issue of the protest should be addressed.

“The concern of parents that public funds were approved to repair the school, and an announcement made that the school was repaired when in fact no repairs have been carried out to date, should not be ignored, he said.

The Contractor General has reportedly taken an interest in the matter.