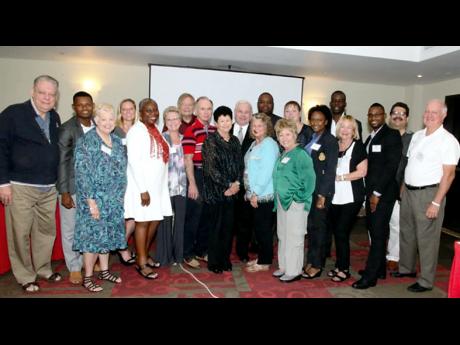 Mark Titus
Participants in the International Association of Document Examiners conference held at the Hilton Rose Hall hotel in Montego Bay, which also included members of the Jamaica Constabulary Force.

The International Association of Document Examiners (IADE) held their annual conference at the Hilton Rose Hall Hotel in Montego Bay recently. This was the first time in the history of the profession that the event was held in the Caribbean region.

Document examiners or handwriting experts are trained in the scientific study of identifying forgery and establishing the authenticity of documents in dispute.

Kathie Koppenhaven, president of IADE, told The Gleaner that conferences are held to share ideas, experiences and approaches to detecting fraudulent documentation.

There are just over 2000 professional document examiners in the world, and renowned Jamaican author Beverly East, who was instrumental in bringing the conference to Jamaica, is one of the most sought-after. She also has the distinction of being the only woman of colour in this lucrative industry.

"The conference surpassed our expectations; my colleagues and I are leaving here more informed and abreast with the newest techniques in fraud, thanks to the various experts that made presentations," said East, who is also chair of the 2015 conference.

Some of the presenters included Amy Johnson Lynch, director of Passport Services at the Passport Immigration and Citizenship Agency (PICA); Dr Michael Echols an international leader in the field of training and executive vice-president of Strategic Initiatives and the Human Capital Lab, Bellevue University; The Jamaica Constabulary Force; and Bill Koppenhaver.

Special areas of focus included ink analysis, pattern recognition in handwriting, diagramming identification in handwriting and mortgage fraud, while students from Norman Manley Law School staged mock trials to sharpen the skills of those in attendance.