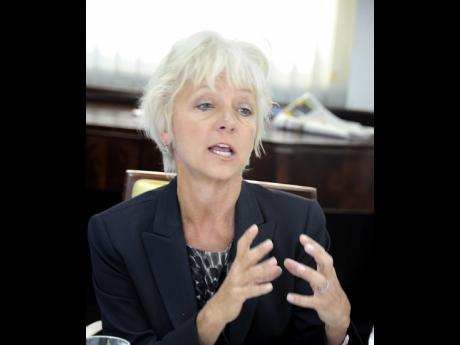 Tomblin told The Gleaner electricity theft will have to be tackled urgently in order for the country to experience true development.

"I now have a vice-president for community renewal, where his primary job is to get people on the grid because we have to see the bigger picture and realise that you can't be prosperous and steal energy," she declared at the Caribbean Maritime Institute's 2015 Maritime and logistics Conference held Wednesday at the Jamaica Conference Centre, downtown Kingston.

"A key factor also is that a number of ministers [of government] have been coming out strongly and sensitising their communities, in addition to giving their support. I must admit that we have been seeing changes," she continued.

Speaking in Parliament recently,Julian Robinson, member for South East St Andrew, said communities have had their electricity supply regularised under a community, renewal programme being undertaken by JPS in collaboration with the Jamaica Social Investment Fund (JSIF).

Under the 'Step Up' pilot programme, seven communities with high incidence of electricity theft have been targeted for specific interventions, including re-wiring of homes.

Robinson said it has been recognised that many persons resorted to stealing electricity as their homes were not legitimately wired.

"We have found that wiring is prohibitively expensive. It can cost a minimum of $50,000, up to $70,000, and it is beyond the capacity of many of those persons to do so," said Robinson, who last year chaired a committee to examine the issue of electricity theft.

The JPS said it lost more than US$18 million last year due to fuel costs it could not recover as a result of electricity theft.

Tomblin said the biggest solution to electricity theft will have to be a change in the mindset of people.

"We have to eliminate the idea among our people that you must be poor and, therefore, you steal electricity. Going forward, we are working very hard to be more innovative and, deep down, I know it's going to happen," she said.