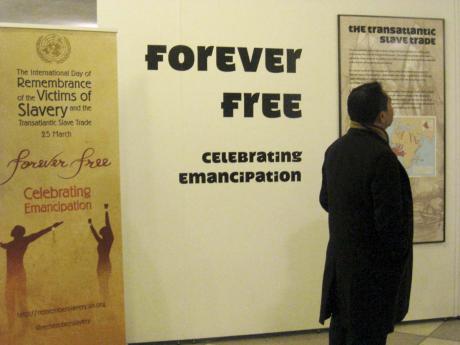 File
A man takes a look at the exhibition put up in celebration of International Day of Remembrance of the Victims of Slavery and the Transatlantic Slave Trade at the United Nations. 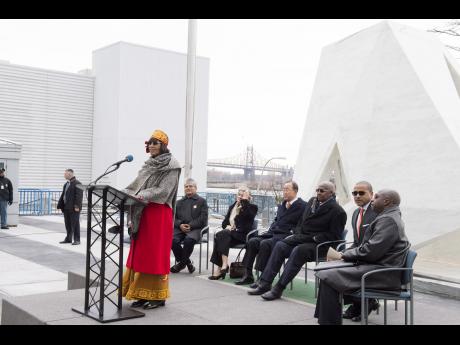 File
Prime Minister Portia Simpson Miller addressing the gathering at the unveiling of the Permanent Memorial to Honor the Victims of Slavery and the Transatlantic Slave Trade in New York. 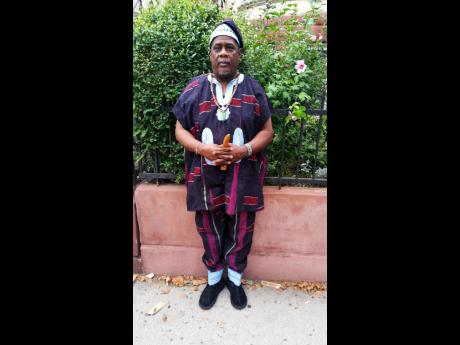 Africa and her Diaspora have produced an impressive field of cultural and political activists, each raising the bar with original work on Black history, colonisation and independence.

The activists have drilled into us the motto: "Never forget the horrors of the past, lest it be repeated." As such, the unveiling of a permanent memorial to honour the victims of slavery and the Transatlantic Slave Trade at the United Nations in March, was a step in the right direction..

On this historic occasion, United Nations Secretary-General Ban Ki-moon, said: “This poignant and powerful memorial helps us to acknowledge the collective tragedy that befell millions. It ensures us to consider the historical legacy of slavery and, above all, it ensures that we never forget.”
He added: “I hope descendants of the Transatlantic Slave Trade will feel empowered as they remember those who overcame this brutal system and passed their rich cultural heritage from Africa to their children.”

The United Nation’s acknowledgement of this painful chapter is very much connected to the annual Emancipation Day celebrations that take place across the globe, especially in Trinidad and Tobago, the progenitor of this landmark undertaking.

But despite this shift toward historical and cultural awareness, many unresolved issues persist, for example, reparations (a minefield, even for well-meaning, black politicians, including the United States president Barack Obama), and the depressing social, political, and economic state of the black nation.

Coupled with intra-black violence that has caught the attention of community and national leaders, allegations of racial profiling and police brutality, and an overall distrust of law enforcement, the black nation is at a perilous crossroad.

Sadly, the black quagmire in the US is not isolated, but reflects a bigger, more global problem affecting people of colour, even in the Jewish state of Israel, where black Jews have demonstrated against the discrimination, lack of opportunities and deplorable living conditions.

The question remains: How can the UN Slave Memorial and Emancipation Day celebrations translate into tangible gains, economically and politically, mindful that cultural holidays and monuments can emerge as mere cultural fanfares to be exploited by political opportunists?

It is an imposing enquiry that Trinidad-born, Mahaba Olufemi, was willing to explore.

A former resident of St James, Trinidad, Olufemi now resides in Brooklyn, New York, where he has been involved in cultural and social activism. Olufemi has been an Ifa priest since 2001 and a practitioner of the Shango Baptist faith since 1970.

Articulate and candid, in June 2010 Olufemi formed the Committee for the Commemoration of Emancipation Day Internationalised, of which he serves as president.

He said this year has been pivotal and encouraging, having been funded by Citizen’s Committee for New York City, an organisation that promotes community movements.

Olufemi is now working tirelessly, alongside board members, to implement a series of cultural and educational activities with the ultimate goal of having New York State officially designate a special day to commemorate the Emancipation struggle.

“Emancipation is more than a single day event,” he said. “It should be viewed as a political and economic movement because slavery and colonialism were politically and economically driven. But first, we must view it as a spiritual movement."

“We cannot destroy the environment; pollute the air and water; kill insects, rats, fish, birds and beasts at will; wage war on each other for no other justifiable reason than to show supremacy over one another. This is against the laws of Olodumare, the God of the orishas.”

Olufemi further argued that we cannot devalue cultural component of the emancipation movement,  because slavery was also aimed at deculturalising every person under its control.

"Any Emancipation movement, he noted must first devise or endorse a progressive agenda," he added as he argued that without that we are left with a movement that cannot effectively respond to the numerous needs of our communities.

Olufemi said the emancipation movement among the Diaspora in New York has failed to garner momentum because “there are just too many disparate groups.”

He argued that all existing resources must be brought under one leadership and a binding constitution.

“All people of conscience – black or white – should convene as one to advance a common cause which is empowerment and official recognition of Emancipation Day.

“The fabric of so many societies is still based on race. Blacks have always been at the lowest rung of the economic ladder; living in the poorest neighbourhoods and going to under- resourced schools."

Olufemi has challenged the authorities to invest more in poorer communities. "We have to give more to the community. Instead of building more jails and spending trillions on devastating wars in foreign countries – that have nothing to do with us – money should be used for national development, for better health care, better infrastructure,  teachers and for institutions that are fully-equipped to compete at a global level.”

He blasted the commonly-held belief that wanton black-on-black killings are due to inherently criminal minds.

"There are people who are financing the illegal guns and drug trade in our community. There is a conspiracy to destroy black lives. This goes on, not only in the US but in the Caribbean, especially in Jamaica and Trinidad and Tobago. This is all part of a conspiratorial policy against black people.”

However, he conceded that the black nation should share some culpability for some of its distress. “Some black leaders in Africa and the Caribbean are corrupt and allow foreign powers to control their nations’ resources while they get handsome kickbacks. Furthermore, these countries are plagued by cronyism and political partisanship.

“We must have new revolutionary movements that recognise these challenges and work toward resolving them. They must remove the old guard democratically, through the electoral process.  They must educate and raise the level of awareness of our youth.”

When asked to predict the state of the black nation in the next decade, Olufemi was buoyed. “I am an optimist. I see all peoples rallying around emancipation movements. I envisage a new political philosophy that will end the two-party grip on power. I have confidence that we will have a brighter tomorrow.”
Olufemi also tackled the contentious subject of reparations.

“Our organisation has some philosophical connection to the Caribbean Reparations Committee. I feel that an apology is not enough. Some amends must be made to the damage done to a people. Compensation should be managed by trustees to be used in areas where it’s needed in respective countries.”
He said that sincerity and faith in one's spiritual bearing are important to undertake the Herculean task of leading a global movement for radical change in the political and economic sector.

However, he reminded his detractors of the requisites for success: You don’t need a PhD behind your name to get things done. I have the will, passion, drive, and vision to fulfil this calling. These are the attributes that are needed right now.”

Dr Ashby is the author of 'Anam Cara; Your Soul Friend and Bridge to Enlightenment and Creativity.'
Feedback: glenvilleashby@ gmail.com or follow him on Twitter@ glenvilleashby