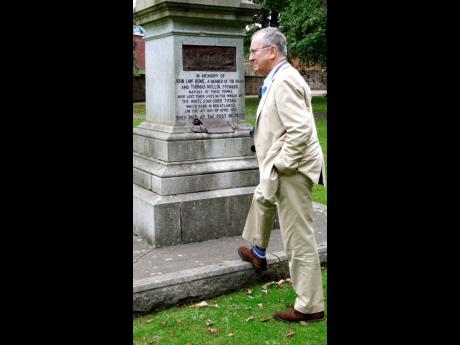 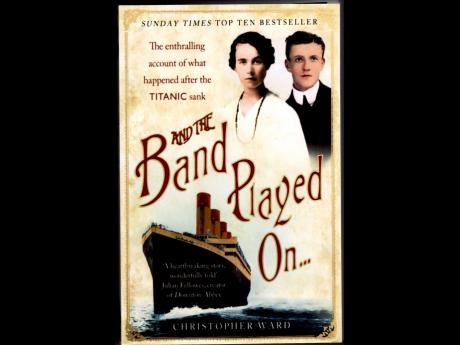 Christopher Ward
The cover of Christopher Ward's best selling novel which tells the story of the life and death of his grandfather, who was only 21 when the Titanic sank.
1
2

When I began writing And The Band Played On about the life and death on the Titanic of my grandfather Jock Hume, I thought my own family history could hold no more shocks or surprises. But I was wrong.

Earlier this year, I contacted a collector of Titanic memorabilia, Senan Molony, after hearing he had acquired some pages from the ledgers of the Titanic Relief Fund.

The fund was set up to provide financial support for the widows and orphans of passengers and crew who died.

Molony, a Dublin-based author and journalist, told me that he had a page in his collection, dated 1915, which recorded the monthly payment by the fund to my grandmother Mary Costin for her 'infant' (my mother).

He emailed me a scan of the page and when I rang to thank him, he said: "I have another page which may be of even more interest to you. It would seem that the fund made similar payments to another dependant of Jock's, a woman called Ethel McDonald. Does the name mean anything to you?"

It didn't, but three minutes later, when I saw the scan of the second page from the ledger, I knew at once its significance:

"McDonald, Miss Ethel (Hume) - The Colonial Bank, Kingston, Jamaica. On the first of first month in each quarter remit draft in favour of Colonial Bank for payment to Society of St Vincent de Paul, who see about the application of the money."

If you read my book, you will remember that the year before his death Jock spent three months in St Andrew, Jamaica, playing in the orchestra at the Constant Spring Hotel (now home to Immaculate Conception High School), then one of the most fashionable resorts in the Caribbean.

The sum paid to Miss McDonald by the Titanic Relief Fund was the standard grant for the care, health and education of a child whose father had died on the ship. And the claim number that the fund allocated to Miss McDonald, No. 689, was the same as my mother's.

I knew from my own grandmother's experience that the fund did not make payments to unmarried mothers unless there was absolute proof of paternity. This could mean only one thing, Jock had fathered a child in Jamaica.

Friends in Jamaica put me in touch with a genealogist, Donald Lindo. On the basis that Jock had arrived in Jamaica on Christmas Day 1910 and left in April 1911, I was able to give Lindo a tight window for his search for a child born to Ethel McDonald. A week later, Lindo sent me the birth certificate.

On November 2, 1911, Ethel McDonald, a barmaid of 37 Maiden Lane, Kingston, had given birth to a boy, Keith Neville McDonald.

Like my own mother's birth certificate, the space for the name and address of the father was left blank.

Two days later, I flew to Kingston, my mind buzzing with questions during every minute of the 10-hour flight. Did Jock accept responsibility for the child he fathered in Jamaica? He must have done, otherwise the Titanic Relief Fund would never have authorised payments to Ethel for her son Keith, who would have been five months old when the Titanic sank.

Jock and Ethel must have exchanged letters which provided the fund with the necessary corroboration.

Did my grandmother, Mary, know about Jock's Jamaican son, born less than a year earlier than her own child? Very likely. It would explain the cold, disapproving expression on Mary's face in the only surviving photograph of her, a look that went beyond grief into anger.

And Jock's father, Andrew, did he know? Of course, he would have. For the first time, I began to feel some sympathy for Jock's grieving father, who must have been furious when presented with a second child by his wayward unmarried son, this time posthumously.

No wonder he treated my grandmother, Mary Costin, so unkindly.

But this was not the time for speculation. In Kingston, my sole objective was to find out what had happened to Ethel McDonald and her son, Keith, and to locate their descendants.

Be sure to read the continuation of this tale in tomorrow's Gleaner.